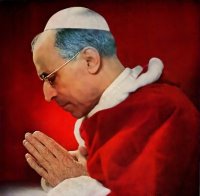 Alito would be fifth Catholic on Supreme Court
By Jerry Filteau

WASHINGTON (CNS) -- If Judge Samuel Alito Jr. is confirmed as a U.S. Supreme Court justice, it would be the first time in history that the majority of justices on the nation's highest court are Catholic.

President George W. Bush Oct. 31 nominated Alito, a former U.S. attorney in New Jersey and for the past 15 years a judge on the Philadelphia-based 3rd U.S. Circuit Court of Appeals. He is widely regarded as a strong conservative on an appellate court that is considered among the most liberal in the country.

The 55-year-old judge is likely to face strong Democratic opposition because on the appellate court he opined that it was constitutional to require wives to notify their husbands before having an abortion. That opinion came as a minority dissent in Planned Parenthood vs. Casey, a landmark case contesting Pennsylvania's 1989 Abortion Control Act....

Welcome to 21st century America! My how things have changed! In the early 20th century American Catholics were discriminated against in the workplace, looked down upon in society, and viewed as a threat to the American political system. Among the most militant anti-Catholics were Protestant Fundamentalists, who saw the pope as the Antichrist, and the Church itself as an anti-Christian "cult." Catholics were viewed as nothing more than whitewashed pagans, both ignorant and amiable. Fundamentalists worried that Catholics in high government offices might be too easily influenced by the pope and the teachings of the Catholic Church.

Now it's a full century later. America still has it's old anti-Catholic Fundamentalists, but they are a dying breed, forced by progress into the attic of irrelevancy. Today, Catholics dominate the mainstream of American politics. But in the 21st century, a new form of anti-Catholicism has risen to the mainstream. It's not based on the old sectarian differences between Catholics and Protestants. Rather, it's based on the ideological differences between conservatism and liberalism. Now we live in a world where Catholics can be good Catholics, or they can be good liberals (Democrats), but never both as the same time. That's because the liberal establishment has created a mindset within the Democratic Party that when it comes to politics, the only good Catholic is a bad Catholic, meaning a Catholic who doesn't practice the teachings of the Church.

Liberal Democrats generally don't have a problem with Catholics, so long as they deny the Church's teachings on moral issues like abortion, euthanasia and homosexuality. Catholics have no problem ascending to the highest ranks of the Democratic Party so long as they are good liberals and bad Catholics. Ted Kennedy, John Kerry, Mario Cuomo and Nancy Pelosi; are examples of this. Their religious beliefs are considered untouchable by the mainstream liberal establishment. But when it comes to good practicing Catholics, like Supreme Court nominees John Robers and Sam Alito, their faith is "fair game." Consider the following remarks about John Roberts by liberals in the mainstream media and the Democratic Party...

Bill Press (Sun-Sentinel, 8-2-2005): "It is absolutely essential to explore Roberts' religious beliefs as part of the confirmation process."

John MacArthur, publisher of Harper’s Magazine, (Providence Journal, 8-2-2005): "The Roberts couple seem to be very well-educated; I wonder whether in their high-minded socializing with Clarence and Virginia Thomas (at the College of the Holy Cross) and Robert and Mary Ellen Bork (at the lay Catholic John Carroll Society), they find time for informal book chat…."

Dahlia Lithwick, legal analyst for Slate, (NPR, 8-2-2005): "And I wouldn’t underestimate the influence of his religion, that Scalia and Thomas, one of the reasons they may not have drifted leftward has a lot to do with very, very strong religious views that pull them to the right. And I think that probably John Roberts will fall into that camp in that sense."

Christopher Hitchens (Slate, 8-1-2005): "If Roberts is confirmed there will be quite a bloc of Catholics on the court. Scalia, Kennedy, and Thomas are strong in the faith. Is it kosher to mention these things?"

Frances Kissling (NPR, 8-1-2005): "If this pope will intervene in the ways he has already in Europe, it certainly raises questions for us in the immediate sense in terms of whether he thinks he can tell John Roberts how to vote when he gets on the Supreme Court."

Mario Cuomo (Meet the Press, 8-7-2005): "Are you (John Roberts) going to impose a religious test on the Constitution? Are you going to say that because the pope says this or the Church says that, you will do it no matter what?"

Tony Harris (CNN, 7-24-2005): "Roberts is a Roman Catholic and a political conservative. This week on our ‘Faces of Faith’ segment we’re going to examine how his faith might influence his profession."

Nina Totenberg (NPR, 7-23-2005): "Don’t forget his wife was an officer, a high officer of a pro-life organization. He’s got adopted children. I mean, he’s a conservative Catholic."

Brian Mitchell (Investor’s Business Daily, 7-21-2005): "The left has other reasons to fear Roberts. Roberts is a Catholic. His wife Jane is a former executive vice president of Feminists for Life."

Barbara Walters (ABC, 7-20-2005): "John Roberts is a, a Roman Catholic. How important to him is his religion? Do you think that it might affect him as a Supreme Court justice?"

We can expect more of the same on Supreme Court nominee Judge Sam Alito. Already the fossilized CBS reporter Mike Wallace snidely referred to Alito as a "nice Catholic boy" on Larry King Live (10-31-2005). To be sure, liberals will be more guarded on their comments this time around after being called on the carpet for their careless remarks on Judge John Roberts. But after all is said and done, they just won't be able to stop themselves from leaking their true anti-Catholic feelings from time to time. Make no mistake about it. The liberal template of the mainstream media and the Democratic Party is as follows. When it comes to politics and high government office, the only good Catholics are bad Catholics -- those who deny the teachings of the Catholic Church.
Posted by Catholic Knight at Wednesday, November 02, 2005