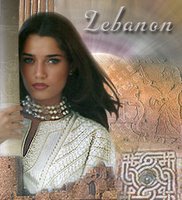 THE CATHOLIC KNIGHT: As I pointed out in a previous story, Lebanon is the last bastion of Christianity in the middle east. A little over a thousand years ago, Christianity was the dominant religion around the whole Mediterranean, which included the areas we now call Israel, Lebanon, Egypt, Syria and Jordan. That all changed with the rise of Islam, and now Christianity has been reduced to a tiny minority in all of these countries, with the exception of Lebanon. But today Lebanese Christians are not free. They’ve been controlled and manipulated by the tyrannical hand of Iran through a militant terrorist organization known as Hezbollah. So tight is Hezbollah’s grip on the Lebanese government that government officials are afraid to speak anything ill about Hezbollah, Syria or Iran. The Lebanese government is held hostage to the will of radical Islam, while Lebanese Christians can only watch in horror as their country now feels the wrath of Israel in its provoked war on Hezbollah. As I cited in a previous entry...

That is a lot of Christians! To think that if just half of them were to return to Lebanon, Christianity would dominate the Lebanese landscape by a super-majority. Lebanon could potentially serve as a viable launching point for Christian evangelism into the entire middle-east. Indeed, it could have served in such a role for the last 30 years, and that’s the sad part. Though Christianity is already so well established in Lebanon, it’s evangelistic outreach is virtually zero. Why is that?

The phenomenon is called dispensationalism, and it’s a facet of Evangelical Christianity that relates to a common belief about the end-times. In a nutshell, dispensational beliefs center around the notion that the Christian Church and the Kingdom of God (New Israel) have absolutely nothing in common. Many Evangelicals believe the Church is nothing more than an aberration -- a 2,000 year pause in God’s time table. God’s real concern, according to dispensationalists, is reviving the old Kingdom of David (Land of Israel) in which the modern (secular) State of Israel plays an important role. They believe God intends to bring all the Jews back to the Land of Israel, destroy the Islamic ‘Dome of the Rock’ in Jerusalem, and rebuilt the ancient Jewish Temple to reinstitute the Jewish priesthood and animal sacrifices again. Only after these events occur, so say the dispensationalists, will Jesus Christ be able to return at his Second Coming. Consequently, many Evangelicals believe it is their religious duty to give money, prayers and political support to Jews within the modern State of Israel. These donations finance the return of Jews from all over the world -- particularly the old Soviet Union. They’ve also given millions to the Jewish ‘Temple Project’ which aims to set up the old Jewish priesthood and rebuild the Temple over (or near) the site of the ‘Dome of the Rock.’ Their political support of Israel is unwavering, which includes the belief that Israel should annex the disputed territories of the West Bank, Gaza and the Golan Heights for the purpose of restoring the territory of the old Davidic Kingdom. This type of Evangelical support of Jewish causes (some more radical than others) has been going on for at least 30 years now. This is the primary focus of donations to the Holy Land coming from western Christians.

Meanwhile Christians in the middle east go forgotten. Though once sizable in Palestine 50 years ago, they’ve now been reduced to a mere handful. The same goes for all regions of the middle east -- except Lebanon. In Lebanon the Christian population is still sizable enough to do something, and make a difference, if only they were properly equipped with Evangelistic materials and motivation by enthusiastic missionaries. In Lebanon, Christians could operate in relative freedom, working toward winning the hearts and minds of Arabs and Jews in that volatile region. With the conversion of more middle easterners to Christianity, much of the violence in that region can end. Jesus Christ is the solution here; not war, not diplomacy, and certianly not compromise with Islam. Arabs will have little desire to kill Jews when the God they worship is a Jew -- Jesus Christ. Jews in Israel will have little to fear from Arabs bearing bibles and rosaries seeking pilgrimage to one of Christianity’s holy sites. With the conversion of Arabs to the Christian faith, radical Islam will gradually loose ground. All of this could become reality, with Lebanon as the launching point, if only western Christians (particularly American Christians) would start supporting it. If for no other reason, you would think American Christians would consider this for their own benefit after 9/11/2001. The truly sad part is that all of this could have been happening in the decades leading up to this century, but alas, it didn’t happen that way.

The lure of dispensationalism is strong for Evangelicals. It’s hard to support your Christian brethren in a place like Lebanon, when it’s much more inviting to hasten the return of Christ by importing as many Jews as you can to Israel, and then rebuild a Temple that’s sat in ruins for 2,000 years. Even if it means that doing so will probably inflame the Muslim world and ignite yet another global jihad.

When the bombs stop falling, and Lebanon is finally liberated from the evil hand of Hezbollah, (regardless if this ignites World War III), what will western Christians do? Will American Evangelicals finally wake up and smell the coffee? Will they finally realize that while they’ve been fantasizing about hastening the return of Christ, their donated money has been squandered on Jewish dreams that have no hope of becoming reality, or bringing peace to a region that needs it so badly? Will they finally realize that their money, prayers and political support will be better spent on Christians trying to evangelize the middle east? Will they turn their attention toward rebuilding Lebanon and equipping Christians there for the missionary work ahead? Maybe it’s time western Christians think about doing what Christ told us to do, “go make disciples of all men,” instead of trying to fulfill man’s interpretation of God’s end-time prophecies.
Posted by Catholic Knight at Monday, July 17, 2006

Is the Tridentine Mass A Key to Christian Unity? 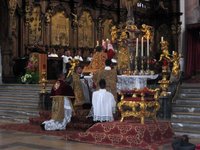 "Similarly, it must not be forgotten that from the beginning the Churches of the East have had a treasury from which the Western Church has drawn extensively in liturgical practice, spiritual tradition, and law" — Unitatis Redintegratio, November 21, 1964.

Is it truly feasible that the "freeing of the classical Roman rite of liturgy" is a small part of the Pope's overall plan for paving the way for the reuniting of the Latin Church with the separated Churches of the East?

Bishop Fernando Rifan, who heads up the Apostolic Administration of St. John Mary Vianney in Campos, Brazil, said he believed a further liberalization of the liturgical rite of Pope St. Pius V would aid ecumenical relations with the East.

"I really think that the Traditional Latin Mass widely and freely available would be, among many other good reasons, a great benefit in the field of the true ecumenism with the Orthodox," he said. "This would be primarily because the Traditional Liturgy is much more similar to the Oriental [Eastern] rites in the aspect of the sacred, veneration, and beauty."

Bishop Rifan and his priestly society achieved full canonical recognition and regularization with the Church on January 18, 2002.

It is hoped by many traditionalists and the Holy See that the positive example of this group of priests, which offers all the sacraments exclusively according to the ancient rites, will serve as a model for other traditionalist priestly societies such as the Society of St. Pius X (SSPX), to potentially reach full regularization with the Church.

Archbishop Raymond Burke, a notably obedient son of the Church, particularly with applying Pope John Paul II's request in Ecclesia Dei Adflicta to be "wide and generous" in allowing the Classical Roman liturgy for those Catholics who desire it, agrees with Bishop Rifan's assessment, but with a nuance.

"I wouldn't think that the Holy Father would be doing this simply as a strategy [for ecumenical relations with the Orthodox], but I do think it will be an effect of a restoration or in the 'reform of the reform' of the liturgy," Archbishop Burke said.

"It seems to me for the Eastern rites, and for those of the Orthodox Churches, the reform of the liturgy after the council and the concrete expression is so stripped of the transcendent, of the sacral elements, it is difficult for them to recognize its relationship with their Eucharistic Liturgies," he said.

Archbishop Burke agreed that the Eastern Churches would most likely identify more readily with the Classical Roman rite of liturgy, and its similarities with their own Divine Liturgies, than the Novus Ordo liturgy.

"It would be easier for them to see the unity, the oneness in the Eucharistic Sacrifice, by a rite of the Mass, just limiting ourselves now to talking about the Holy Mass, that it was richer in those dimensions — the elements of the transcendent — the symbols of the transcendent element of Christ — Christ in action in the Mass — the unbloody renewal of the Sacrifice of Calvary," Archbishop Burke said....