Feminist Bullies In The Catholic Church

THE CATHOLIC KNIGHT: A dear Catholic sister recently commented on this blog, stating her intention to wear the chapel veil after her daughter is born this summer. She said it was after reading this blog, talking with her husband, and much prayer, that she was able to overcome the peer pressure against the chapel veil in her parish. I responded in support of her decision as follows...

As you can see by the poll at the top of every page on this blog, the chapel veil is supported by the overwhelming majority of Catholics - both men and women (approx. 56%). While about 5% are unsure on the matter, a small minority of just 34% are dead set against it. (I assume these are mostly feminists, and are probably older women.)

However, because of this mere 34%, the overwhelming majority of Catholic women (nearly all), in the English-speaking world, no longer practice veiling. Why? Because they're afraid. They're afraid of what others will think. Yet I've proved on this blog that those who disapprove are a small (albeit loud) minority. They are vastly outnumbered by those who do approve.

This is what we call "the tyranny of the minority." It's when a small group of people are able to control an entire population simply through peer pressure. That's what's going on here. A small minority of "feminist" Catholic women are coercing nearly all Catholic women, by means of peer pressure. They do it by being loud and obnoxious. Put on a veil, and they jump all over you.

That's just WRONG, plain and simple. It's a form of bullying, and it violates what the Bible says on the matter. This small minority of women, are not only behaving as bullies, but their borderline heretics, because in pressuring women to remove the veil, they violate the plain teachings of Scripture on the matter.

I put the chapel veil poll at the top of every page on this blog so women who want to veil will see that they have nothing to fear. Those who support them are in the MAJORITY - a large majority. Only a very tiny minority oppose them, and they do so in violation of Scripture.

It's time for Catholic women to be strong. It's time for them to stand up to tyranny. How dare any woman pressure another to ignore the plain teachings of Scripture on this matter! If that tiny minority wants to refuse the veil, then so be it. Nobody is making them wear one, and nobody is ever going to. But how dare they try to pressure another woman to refuse the veil. Who do they think they are!?!

Let it be known from this time forth that 'The Catholic Knight' will boldly defend the right of any Christian woman (Catholic or otherwise) to veil for prayer and worship. Furthermore, I call upon all Christian men (Catholic or otherwise) to boldly and passionately defend their wives and daughters who make a similar decision. Our women are being bullied by a tiny feminist minority that is hell-bent on peer pressuring them to ignore the plain teachings of Scripture on this matter. A call goes forth from here to all Christian men - "Be a man, and defend your women against the tyranny of the minority." 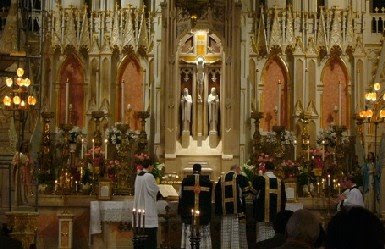 (London Telegraph) - ...According to a senior Vatican cardinal, Pope Benedict wants the old Latin Mass celebrated in parishes even where the people have not asked for it....

...According to the Catholic News Agency, Cardinal Dario Castrillon Hoyos, head of the Pontifical Commission Ecclesia Dei, let the cat out of the bag in an interview for a DVD instructing priests on how to celebrate the Extraordinary Form.

Here’s the money quote: “The cardinal said that parishes and priests should make available the Extraordinary Form so that ‘everyone may have access to this treasure of the ancient liturgy of the Church’. He also stressed that, ‘even if it is not specifically asked for, or requested’ it should be provided. Interestingly, he added that the Pope wants this Mass to become normal in parishes, so that ‘young communities can also become familiar with this rite’.”...