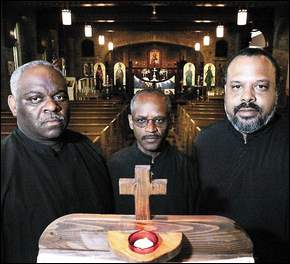 After a lifetime in traditional black churches, Robert Aaron Mitchell discovered the sights, smells, sounds and ancient traditions of the Orthodox church.

"I discovered Orthodoxy while I was on the Internet one day back in 2001, and I was so drawn to it that I had to go attend a liturgy," Mitchell says. "I had no frame of reference for these traditions, but suddenly, I felt like this void was filling in my life. I felt like I was finally coming home."

Mitchell, 48, a project manager for AT&T in Detroit, is among a small but growing number of black Americans, many of them professionals, who are joining Orthodox churches. That's the branch of Christianity that split with Rome about 1,000 years ago and is known for colorful icons and the ethnic traditions it preserves in religious customs.

The attraction, Mitchell says, lies in discovering that for thousands of years, Africans played a vital role in the Orthodox world.

The Rev. Moses Berry, an Orthodox priest and pastor of Theotokos "Unexpected Joy" Orthodox Mission, Ash Grove, Mo., began his career as a Protestant preacher, a family tradition reaching back into the 1800s. Then, in 1983, he visited an Orthodox church in Atlanta and was so moved that he retrained to become a priest in the Orthodox Church in America. He also helped to organize the coalition of clergy, scholars and lay leaders coming to Detroit.

"Reconnecting with the Orthodox tradition connects us with the earliest Christian traditions," Berry says. "It means that, when our ancestors were brought here as slaves, they didn't arrive here with just a collection of tribal religions. They didn't all discover Christianity here. In fact, many Africans already were part of the ancient Christian church."

That was especially true for Africans with roots in the eastern part of the continent, Laike-Mariam Misikir, 50, says. An automotive engineer from Ann Arbor, Mich., Misikir is from a family of Orthodox priests that extends back many centuries in Ethiopia. In Detroit, Misikir serves as a subdeacon, assisting priests during liturgies...

THE CATHOLIC KNIGHT: Talk about getting in touch with your roots -- wow! This is really good news, because ancient African Christianity is so rich in tradition and culture. It makes sense that African-Americans would be attracted to this. It makes a lot more sense than the 'black Muslim' movement we saw back in the 1960s. Africans were Orthodox Christian long before Islam came along. The first black Christians were baptized way back in the middle first century. (It's actually recorded in the Bible -- Acts 8:26-39.) While the first black Muslims didn't come along until six-hundred years later. In fact, many Africans were worshipping the one true God, with dignity and beauty, while northern Europeans were still worshipping the sun, moon and trees. That's just a matter of historical fact. Northern Europe wasn't evangelized by Christianity until the middle 5th century. So there is a lot of cultural recovery to be gained by African-Americans returning to their Christian roots in Africa. The dignity and beauty of the Eastern Orthodox liturgy is second to none. Only the traditional Latin mass of Catholicism comes close, and even then there is some debate. I sincerely hope this movement takes off. It would be a wonderful thing.

The Brotherhood of St Moses the Black is a pan-Orthodox nonprofit organization. Its mission is to minister to Americans the gift of Orthodoxy. In an effort to be good stewards of the manifold grace of God (I Peter 4:10), the organization presents an annual conference that targets those who have little exposure to Orthodoxy as well as the African roots of Orthodoxy. Its vision is to bring Americans closer to Jesus Christ.