Why Every Catholic Should Detest The New York Times 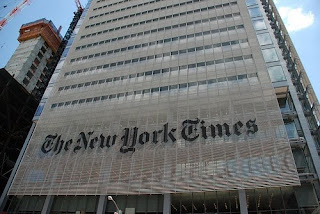 THE CATHOLIC KNIGHT: If you read no other article this weekend, read this one...

(The American Spectator) - The children of Diderot at the New York Times understand the secularist Enlightenment project very well. Its executive editor, Bill Keller, telegraphed this in a 2002 column.

Since he wrote the column before he was promoted to editor, he didn't bother to hide his anti-Catholic bigotry with circumspect throat-clearing. He described himself as a "collapsed Catholic" -- "well beyond lapsed." He affected a false modesty about this, saying that for this reason he claims "no voice in whom the church ordains or how it prays or what it chooses to call a sin." But of course he does claim that voice -- and thinks all should obey it.

He made it clear that he was rooting for "reforms" that would reduce Catholicism to a captive of modern liberalism: "…the struggle within the church is interesting as part of a larger struggle within the human race, between the forces of tolerance and absolutism....

The New York Times campaign against the pope (and the Catholic Church in general) is well documented here, here and here.

There is no justifiable reason for anyone claiming the name "Catholic" to subscribe to this blatantly anti-Catholic rag of intolerance and hate toward the Catholic Church and anyone who loves their Catholic Christian faith. I've never had a subscription to The New York Times, but if I did I would cancel it immediately, and publicly burn every paper I continued to receive until the deliveries are finally stopped. I would also tell every Catholic soul I know to do the same.

Catholics ought to cancel their subscriptions to local newspapers as well, if they reprint New York Times articles.

Please pass this message on to every Catholic you know. Here is the link: http://catholicknight.blogspot.com/2010/04/why-every-catholic-should-detest-new.html