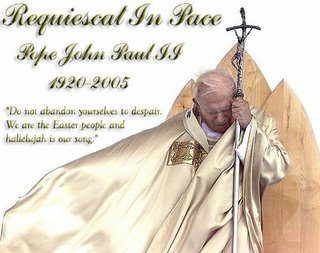 The Pope was Jewish says historian

A MANCHESTER historian has claimed that Pope John Paul II was Jewish.

Mr Wise, a researcher in orthodox Jewish history and philosophy, said the late Pope's mother, grandmother and great-grandmother were all probably Jewish and came from a small town not far from Krakow.

The Pope was a priest and cardinal archbishop in the Polish city before his election to the papacy.

Mr Wise said: "According to orthodox Judaism, a person's Jewish identity is passed down through the maternal line. I saw a photograph of the Pope's mother and I showed it to people who didn't know who she was...

THE CATHOLIC KNIGHT: Somehow I'm not surprised by this. It is now common knowledge that Karol Wojtyla fell in love with a Jewish woman prior to enrolling in the seminary. Had she not been taken away by the Nazis, it is very probable that Wojtyla would have married and had children with her. Sadly, she was taken away, and Wojtyla's sadness over this eventually led him to the priesthood, where he would find comfort in serving God. This makes a lot of sense to me. The man's mother was Jewish (which officially makes him Jewish), and she died when he was very young. Then he fell in love with a woman just like his mom. I find it interesting that Pope John Paul II (Wojtyla), during his 27 year papacy, fostered within the Church a revived devotion to Mary -- a Jewish mother.