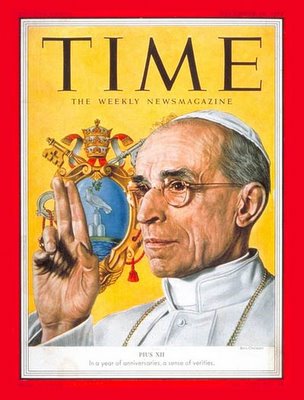 ROME, JAN. 17, 2006 (Zenit.org).- A U.S. rabbi says that the title "Righteous among the Nations" should be conferred on Pope Pius XII for his efforts to defend the Jews during World War II.

Rabbi David Dalin, a professor of history and political science at Ave Maria University in Florida, makes his case in his book "The Myth of Hitler's Pope," published by Regnery.

The work shows that, in the course of history, many popes defended and protected the Jews from accusations and persecutions. It also recounts many incidents which show how Pius XII saved Jews from Nazi persecution.

Rabbi Dalin quotes authoritative studies by Jewish authors, such as Pinchas Lapide's "Rome and the Jews" and "Pius XII and the Jews," written in 1963 by Joseph Lichten, a member of the Anti-Defamation League.

The rabbi also quotes Hungarian historian Jeno Levai who, in the face of accusations of silence against Pius XII, wrote "Hungarian Jewry and the Papacy: Pope Pius XII Did Not Remain Silent. Reports, Documents and Records from Church and State Archives," published in English in 1968. Robert M.W. Kempner, the deputy U.S. counsel during the Nuremberg trials, wrote the introduction to that book...

As I pointed out in a recent editorial below, we are living in a time of historical revisionism. For years people have been taught to believe that Pope Pius XII assisted Hitler (through silence) in the Holocaust. Nothing could be further from the truth, and the historical records tell the story in full. Pope Pius XII actually worked to save the Jewish people from the Holocaust. Those who have been led to believe otherwise are victims of propaganda, which has been spread to defame the Catholic Church, and divert some blame for the Holocaust away from Hitler and Nazi Germany. The propaganda against Pope Pius XII is specifically designed to make the papacy look bad, and Hitler look not so bad. When Jews subscribe to it, it victimizes them twice, because not only does it shift blame away from the regime that tried to destroy them, but it also causes them to think badly of one of the men who tried to help them. It's time the truth be told, and I applaud Rabbi Dalin for taking up the cause. Pope Pius XII will be canonized as a Saint one day, and when he is, the primary reason for his canonization will be the aid and comfort he gave to nearly 1 million Jewish victims of the Holocaust.
Posted by Catholic Knight at Tuesday, January 17, 2006