Hagia Sophia - Vatican of the East 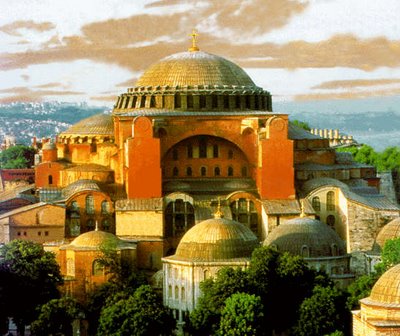 THE CATHOLIC KNIGHT: When the pope visits Istanbul this week, keep a close eye on him as he enters the Hagia Sophia -- what used to be the eastern version of the Vatican for the Ecumenical Patriarch. It was taken by Muslims at the end of the middle ages, was made into a mosque, and has been a museum since the 1920s. Any act of faith the pope makes, even crossing himself, while visiting there will be seen by Muslims as a papal claim on the ancient Church for Christianity. Personally, I hope he gives the place a full pontifical blessing! How can Turkey even consider becoming a member of the European Union if it does not allow religious liberty? I say let the pope say mass there if he likes, and then make sure he has police and military protection from the Turkish government if the Islamic-fascists outside decide to riot. If Turkey wants to be part of the Western world, than this is what it means. Freedom of religion is considered a sacred right in the West, if Turkish Muslims don't like it, than they had better get used to it. Otherwise, they can forget about affiliating with Europe, and join the rising Islamic Persian Empire in the middle east. Sadly, I doubt the pope will do anything provocative. This is probably more of a bridge-building mission. I doubt Benedict XVI will do anything to aggravate an already tense situation. It's times like these I long for the provocative days of John Paul II, when the pope thumbed his nose at communism in Poland, and then carried on as if to say "whadda ya gonna do about it!"

The loudest boos, however, are reserved for references to the Pope’s proposed visit to Saint Sophia, the magnificent Byzantine basilica where Mehmed the Conqueror prayed after he took the city for the Ottoman Empire in 1453. It remained as a mosque until the Turkish Government turned it into a museum in the 1920s, to the annoyance of Islamists. If the Pope prays or so much as crosses himself when he enters the vast domed building, he will have staked a claim on the place, the protesters say.

Away from the scene, however, rather than complaining about the visit, secularist columnists have been upbraiding the Government about the mixed messages it has given the Pope and the lost opportunity to show that Turkey, a European Union candidate, is part of the Western world rather than a remote Islamic outpost...

SAN ANTONIO, TX, November 16, 2006 (LifeSiteNews.com) - A pro-life trend among conservative Protestants is picking up steam in the US, Newsweek reports. In 1995, David and Suzanne Bortel of San Antonio, Texas developed a website called Quiverfull.com to lend support and encouragement to couples who are totally open to as many children as God gives them. Under the name of Quiverfull, the group encourages its members to reject all forms of birth control and welcome children as "a gift and blessing from our gracious heavenly father."

The name of the group is taken from Psalm 127 of the Bible which says:

"Behold, children are a heritage from the Lord, The fruit of the womb is a reward.
Like arrows in the hand of a warrior,
So are the children of one's youth.
Happy is the man who has his quiver full of them."

Members of Quiverfull reject not only birth control but also Natural Family Planning, a natural method and one condoned by the Catholic Church as a moral way, under serious circumstances, to avoid conception by abstaining from sexual intercourse during the fertile periods of a woman's monthly cycle.

Quiverfull's beliefs also do not condone any form of artificial conception, such as in-vitro fertilization. Mary Pride, a Quiverfull believer and author of the book, 'The Way Home', says, "You shouldn't be unnatural in going to a fertility clinic or in trying to avoid having children by regulating when to have sex with your husband."

The Quiverfull website is careful to emphasize that family size is not what makes one a Quiverfull believer. It says, "Whether your quiver is large or small, you are welcome." Regarding all children as blessings and leaving fertility in the hands of God is the Quiverfull mission.

Rejection of birth control is a growing trend among many denominations of Protestants. Many Protestants who previously espoused birth control methods, are becoming more and more alarmed by the contraceptive mentality that has overtaken the country. In today's society, sex and procreation of children are commonly viewed as two separate components of marriage. Albert Mohler, president of the Southern Baptist Theological Seminary, is very convicted and outspoken on the subject. He says, "If a couple sees children as an imposition, as something to be vaccinated against, like an illness, that betrays a deeply erroneous understanding of marriage and children." 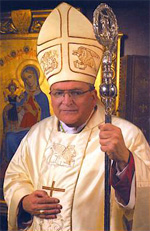 Burke, who is trained as a canon, or church, lawyer, submitted 10 amendments to two proposed documents, more than any other bishop except former St. Louis and current Philadelphia archbishop Cardinal Justin Rigali, who submitted 15.

During the debate on preparing to receive Holy Communion, Burke was adamant that the bishops address an issue he's dealt with in the last few years.

In early 2004, Burke said he would deny Communion to Sen. John Kerry, who was running for the U.S. presidency and who supports abortion rights.


Burke said there was "a clear presence of scandal" in situations involving Catholic politicians who repeatedly legislate contrary to church teaching and yet receive Holy Communion. Many bishops spoke in support of Burke's words. The document was approved overwhelmingly, 201-24, with two abstentions.

The other document was a set of new guidelines for bishops interested in ministry to gay Catholics. It also was approved by a huge margin, 194-37, with one abstention.

During debate before the vote, Burke asked that a national, Vatican-approved group called Courage, which counsels gay Catholics to lead chaste lives, be added to the text as an example of an organization doing the kind of work spoken of in the guidelines. He mentioned that the Courage annual meeting was held this summer in St. Louis and said he'd met with "members and priests who serve as directors and advisers, and it confirmed my view that they are filled with hope and joy, assisting one another in leading a chaste life."

Younger Nuns Are Getting Back Into The Habit 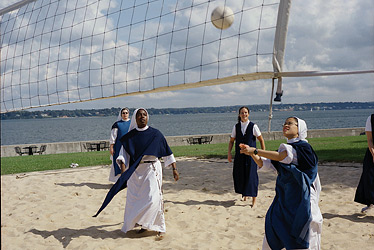 For the iPod generation, it doesn't get more radical than wearing a veil. The hijab worn by traditional Muslim women might have people talking, but it's the wimple that really turns heads. And in the U.S. today, the nuns most likely to wear that headdress are the ones young enough to have a playlist.

Over the past five years, Roman Catholic communities around the country have experienced a curious phenomenon: more women, most in their 20s and 30s, are trying on that veil. Convents in Nashville, Tenn.; Ann Arbor, Mich.; and New York City all admitted at least 15 entrants over the past year and fielded hundreds of inquiries. One convent is hurriedly raising funds for a new building to house the inflow, and at another a rush of new blood has lowered the median age of its 225 sisters to 36. Catholic centers at universities, including Illinois and Texas A&M, report growing numbers of women entering discernment, or the official period of considering a vocation. Career women seeking more meaning in their lives and empty-nest moms are also finding their way to convent doors.

This is a welcome turnabout for the church. As opportunities opened for women in the 1960s and '70s, fewer of them viewed the asceticism and confinements of religious life as a tempting career choice. Since 1965, the number of Catholic nuns in the U.S. has declined from 179,954 to just 67,773, according to the Center for Applied Research in the Apostolate at Georgetown University. The average age of nuns today is 69. But over the past decade or so, expressing their religious beliefs openly has become hip for many young people, a trend intensified among Catholic women by the charismatic appeal of Pope John Paul II's youth rallies and his interpretation of modern feminism as a way for women to express Christian values...