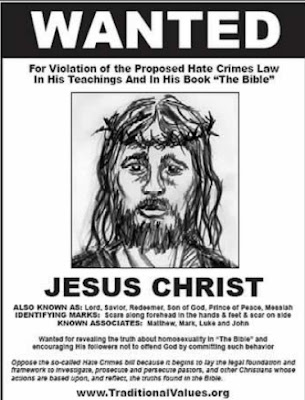 THE CATHOLIC KNIGHT: It's time to wake up folks. The Congressional Democrats have finally crossed the line and shown their true colors. In order to pander to their homosexual constituency, they are willing to sell the Constitution down the river, and pass a bill that authorizes GOVERNMENT CONTROL of churches and religious institutions. Yes, that's right. Congressional Democrats want to tell priests, rabbis, ministers and pastors what they're allowed to teach behind the pulpit, making it a crime for them to teach that homosexuality is a sin, or even to read various portions of the Bible that condemn homosexuality. This is the face of the new Democratic Party. It has become a party willing to sell out the religious freedoms of the American people -- all for a few votes from their gay constituents....

A fast-tracked congressional plan to add special protections for homosexuals to federal law would turn "thoughts, feelings, and beliefs" into criminal offenses and put Christians in the bull's-eye, according to opponents.

"H.R. 1592 is a discriminatory measure that criminalizes thoughts, feelings, and beliefs [and] has the potential of interfering with religious liberty and freedom of speech," according to a white paper submitted by Glen Lavy, of the Alliance Defense Fund.

"As James Jacobs and Kimberly Potter observed in Hate Crimes, Criminal Law, and Identity Politics, 'It would appear that the only additional purpose [for enhancing punishment of bias crimes] is to provide extra punishment based on the offender's politically incorrect opinions and viewpoints,'" said Lavy.

The proposal has been endorsed by majority Democrats on the committee, and already has 137 sponsors in the full House, making it possible it could be voted on in a matter of days or weeks...

...Secondly, it unfairly restricts the expression of fair opinion by Christians, he told WND. "If anything, gays are getting undue deference awarded to them by the courts. That's why we have the same-sex marriage fight and that kind of thing."

Rev. Louis Sheldon, director of the Traditional Values Coalition, which represents 43,000 churches across the nation, told WND that the Democrats sponsoring and supporting the issue "have sold out to the homosexual agenda."

He said churches need to awaken to the dangers of having pastors, lay leaders, or even those sitting in the pews sent to jail for their biblical views. "When they [realize they] could go to jail for preaching the Word of God, they'll be concerned," he told WND.... 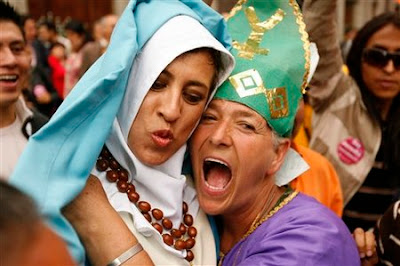 Apr. 10, 2007 (CWNews.com) - The sex-abuse crisis within the Catholic Church was brought on in large part by a collapse in the traditions of ascetical discipline, especially among the clergy. That is the argument of an important book about the crisis, and after years of research on the topic, I find that argument persuasive.

Just over one year ago, the Linacre Institute released After Ascetism: Sex, Prayer, and Deviant Priests. Regrettably, the book has received little public attention-- certainly nowhere near the attention it deserves.

Perhaps this is understandable. The secular media, which have done so much to expose the failings of the Catholic clergy, have little interest in promoting traditional Catholic spirituality. So we couldn't expect the media to recognize the value of After Asceticism.

Church leaders should have snapped up the Linacre Institute's argument. Bishops, religious superiors, and seminar rectors should have recognized an important argument on the proper formation of priests. They did not, and that fact should tell us that something was amiss. But then, we already had plenty of evidence on that score!

Western Catholic bishops, for the most part, interpreted Vatican II in a very liberal and radical way. Rather than seeing Vatican II in its proper context, as flowing from the historic tradition of the Catholic Church, western bishops tended to view Vatican II as a watershed event, which repudiated historic Catholic tradition. As a consequence, western bishops (for the most part) tried to recreate Catholicism in a whole new image. Time honored historic traditions were cast aside. New traditions were created out of thin air -- some of them from non-Christian sources. Moral teachings were pushed to lesser importance, while historic Catholic teachings on social justice were twisted into a kind of Church sanctioned socialism. Nowhere is this more evident than in the "Liberation Theology," repudiated by the Vatican, after being popularized in Central and South America.

The hand of Marxism weighed heavily on the western Church during the decades following Vatican II, while simultaneously, the eastern Catholic Church triumphed over Marxism in eastern Europe. Again, this goes back to the interpretation of Vatican II. Eastern Catholics interpreted Vatican II in the context of historic Catholic tradition. They saw the reforms of Vatican II as naturally following those from the Council of Trent in 1545 and Vatican I in 1869. There was no sense of rupture in Catholic Tradition in the eastern Church. As a result, eastern Catholicism triumphed over the Marxist forces of Soviet communism. In the west, however, where historic traditions was cast aside in the "spirit of Vatican II," the Church easily succumbed to Marxist influences and other liberal ideologies.

There is only one way to rescue western Catholicism, and that is to return to the time-honored historic traditions that once made the western Church strong. This must be done to truly fulfill the "spirit of Vatican II" which never sought to disrupted the flow of historic Catholic tradition from one generation to the next. A return to historic Catholic tradition will bring about the ascetical discipline needed to restore the integrity of the Catholic priesthood in the western world.
Posted by Catholic Knight at Tuesday, April 10, 2007