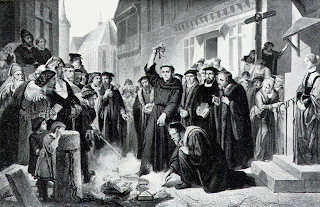 THE CATHOLIC KNIGHT: Okay it's time for "The Catholic Knight" to stir the pot again, so here it goes. I'm going to make the assertion that Martin Luther's heretical doctrine of Sola Scriptura is largely responsible for the moral relativism we see in the secular world today.

Here is the problem. Go to any Protestant church, particularly one of the newer Evangelical nondenominational types. There you will be taught that there is no religious authority outside of the Bible. Now aside from the fact that this assertion is not only unscriptural, but also illogical, it is nevertheless the foundation of most Protestant organizations in the world today. Now the premise that there is no religious authority outside of the Bible inevitably leads people to believe that the Holy Spirit of God is directly responsible for their own interpretation of the Bible. Talk to a good number of Evangelicals and that is exactly what they'll tell you. They'll say they don't need the Catholic Church, or any church organization, to tell them what the Scriptures mean, because they can read the Scriptures for themselves, and the Holy Spirit will automatically lead them to the right interpretation. If we go through Protestant history, we will see that this kind of attitude has been present since the very beginning - even with Martin Luther himself.

Now as we span the panorama of Protestant history, we quickly see where this attitude has led. It's led to division after division after division. What happens is this. Two Protestant pastors come up with mutually contradiction interpretations of some Scripture passage(s). Both believe they are inspired by the Holy Spirit to the correct interpretation and the other is wrong. They can't both be right, and because they both believe there is no religious authority outside the Bible, there is no one to judge between them. So they end up going their separate ways, each taking part of their congregation with them. This is how denominations and affiliations are created. In the 16th century, there were only a few Protestant denominations which could be counted on one hand. Today there are literally thousands. Some say tens of thousands.

Now once we have accepted the notion that the Holy Spirit leads people to contradicting theology because there is no religious authority outside the Bible, it's only a small step to say that the Holy Spirit leads people to contradicting morality for the same reason. Indeed, this is EXACTLY what has happened. In the early 20th century, all Christian denominations agreed that artificial contraception (birth control) was morally wrong and sinful. That changed in 1930 when the Protestant Anglican Communion challenged this Christian moral standard. That was the first major crack in the dam. It wasn't long before others developed. By the end of the 20th century, less than 500 years after Luther's Sola Scriptura revolution, nearly all Christian denominations accepted artificial contraception as morally licit. That's not all though. Many of them accepted divorce too. It gets worse. Some even accepted homosexuality as "part of God's plan" even going to the point of celebrating homosexuality, blessing gay-marriages and ordaining homosexuals to the clergy. Though it seems inconceivable, some of these Protestant denominations even went so far as to say that abortion (a type of infanticide) was morally acceptable under certain circumstances.

Western Christianity had long been divided on theological issues, but now for the first time in modern history, it was divided on moral issues as well. This opened the door of Pandora's Box. With Western Christianity divided on moral issues, it became increasingly easy for morally destructive groups (militant feminists and homosexuals) to begin taking over society, each one insisting that morality is relative, and some of them using Sola Scriptura is their religious excuse.

Catholics need to understand this. One thing really does lead to another, even if it takes centuries. Luther's heresy has played a huge role in bringing Western civilization to its present point of moral decay. Protestants are stuck in a quandary. Those who are honest with themselves will have to reexamine Sola Scriptura in light of what's happened over these last 500 years, and in context with the ancient Christian tradition of episcopal authority. Sadly, most will not. Most will ignore the last 500 years of history, and the moral disaster that has resulted from it. Most will continue to repeat the mantra that there is no religious authority outside the Bible. They will treat Sola Scriptura as the highest authority. There is of course a small problem with that. Sola Scriptura is not found in the Bible. Nowhere in the Bible does it actually say the Bible is the only religious authority. Therefore Sola Scriptura is itself an extra-Biblical tradition! Which means that when Protestants fall back on it, they are falling back on a man-made tradition that is not found in the Bible. So when they say there is no authority outside the Bible, that very notion itself is an authority outside of the Bible. It's a contradiction and an oxymoron. Sadly, few of them will ever see that.

As we approach the 500th anniversary of Sola Scriptura (2020), let us reflect on the doctrinal chaos and moral relativism it has made a significant contribution toward. Granted, I will concede that a large portion of our moral decay has been the product of Godless atheism and Marxism. Some of it has been the result of Humanism, both secular and religious. Nevertheless, Sola Scriptura has taken it's toll and made it's contribution - a significant contribution I might add.