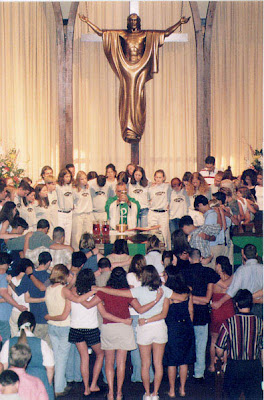 (AP) - Phoenix's Catholic bishop has excommunicated a priest who started a nondenominational ministry after the priest was charged with misdemeanor sexual misconduct.

The action announced Monday against Monsignor Dale Fushek, once the diocese's second highest-ranking administrator, was a response to his creation of the Praise and Worship Center in Chandler....

THE CATHOLIC KNIGHT: It's time for Catholic parishes around the nation to rethink what they're doing. Yes, as Catholics we MUST reach out to the youth in our own congregations, but we need to reconsider how we're doing it.

For starters let's look at the English version of the mass itself. We're currently using a translation of the liturgy that the Vatican has labeled "defective" (read more here), and has revoked our permission to keep using it. That's why a new English translation has been approved by the Vatican and the USCCB, which will be put into use sometime in 2010.

The pope has also made it clear that we should expect more changes to the Ordinary Form of the mass, that will reintroduce traditions long since forgotten by most Catholics. For example, we can expect to see the use of high alter candle configurations, wherein the priest always faces a crucifix, and sometimes (when appropriate) the use of the ad orientem posture, where the priest faces east. We can expect to see the reintroduction of bells at the consecration, along with the use of more incense. The pope has also suggested the use of Latin at the consecration itself in all masses, no matter what language it's celebrated in. He is also planning on moving the "sign of peace" closer to the creed so as to create a greater atmosphere of solemnity during the eucharistic prayers. He has already indicated he would like to see greater use of traditional sacred music (such as Gregorian chant) during mass. The list goes on and on.

What's the message being sent here? It should be obvious. The Catholic Church needs to start being "Catholic" again, embracing our historical traditions, and giving them new life in the modern world. The changes coming out of the Vatican should serve as a guide for the average parish liturgist and choirmaster. We're heading toward a period of greater solemnity, greater reverence, and more tradition. Parishes that resist this change will only get left behind and ultimately hurt themselves.

But what about the youth? How will they be able to relate? Those who seriously ask such questions are operating on a template that is about 30 years old. The pop culture folk masses (which are epitomized by LIFETEEN) are an antiquated relic of the last generation. Youth may still be seeking out loud contemporary music, but mass is not where they really want to find it. Contemporary Christian music is a huge industry now. There are radio stations around the nation 100% dedicated to playing these songs around the clock. Youth can listen to these songs on their car radios, iPods and MP3 players. In fact, they often do. Over the last 30 years a new phenomenon has developed called the "Christian rock concert," wherein Christian youth can scream, dance, wave their hands in the air, etc. This didn't exist in the 1970s and 80s, but it does now, and it's bigger than ever. The youth hear this music all the time, outside of mass, and in fact, it's usually a lot better than anything the local parish choir can produce. Yes there is an outlet for Catholic youth in contemporary music, and Catholic parishes SHOULD be promoting it, but not at mass!

The point is the youth of today can get their pop culture music, in Christian variety form, anywhere they want. There is even a "Catholic flavor" of Christian pop music -- believe it or not. What, you've never heard? Ask any Catholic teenager. Many surveys are now perplexing Church leadership with results finding that the majority of practicing Catholic youths are more "pre-Vatican II" in their mentality. How could that be? and why? For starters, Vatican II has nothing to do with it. What it really has to do with is the sense of solemnity. When Catholic youth visit mass, they're not looking to hear the same thing they can get on their iPods and MP3 players. They're looking for something completely different. They're looking for a sense of the sacred. They want mystery. They want other-worldly. They want to escape the trappings of this earth to meet the Lord in sublime reverence and awe. That's why so many of them are flocking to the Extraordinary Form of the mass. It has nothing to do with Latin. It has nothing to do with the 1962 Missal. It's about solemnity, mystery, reverence and transcending everyday reality. That's something they can't get on their iPods and MP3 players. That's something they don't hear on the car radio, and it's something they will never experience at a Christian rock concert. It's something that only the Catholic Church can give them, that is, IF their local parish is willing.

The excommunication of LIFETEEN founder Dale Fushek should be an eye opening watershed to most LIFETEEN parishes, and contemporary Catholic parishes in general. Fushek's excommunication had nothing to do with LIFETEEN, directly, but it did have a lot to do with the attitude and mindset of the man who created LIFETEEN. It was an attitude and a mindset that got him into trouble with the law, and ultimately led him to create a "nondenominational worship center" outside of the Catholic Church -- effectively a schismatic act. Don't get me wrong. I'm not saying LIFETEEN is schismatic, but I am saying that it was produced by a schismatic mind, and that in itself should be cause for alarm. When you compound this with the obvious problems associated with the current English mass translation (soon to be retired), and a general loss of historic Catholic traditions, you can begin to see the possible dangers. The tragic and saddening event of Dale Fushek's excommunication should be a wake-up call to Catholic parishes all around the nation. Perhaps it's time to look to the pope for new guidance and reconsider the direction of the American Church.
Posted by Catholic Knight at Tuesday, December 16, 2008