Vatican Prefect On Kneeling For Communion 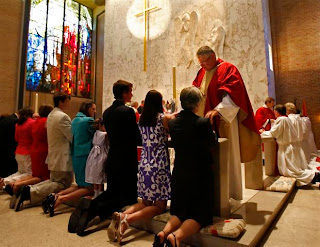 [La Razón:] Nevertheless, Benedict XVI has reiterated in some instances the propriety of receiving communion kneeling and in the mouth. Is it something important, or is it a mere matter of form?

[Cañizares:] - No, it is not just a matter of form. What does it mean to receive communion in the mouth? What does it mean to kneel before the Most Holy Sacrament? What dies it mean to kneel during the consecration at Mass? It means adoration, it means recognizing the real presence of Jesus Christ in the Eucharist; it means respect and an attitude of faith of a man who prostrates before God because he knows that everything comes from Him, and we feel speechless, dumbfounded, before the wondrousness, his goodness, and his mercy. That is why it is not the same to place the hand, and to receive communion in any fashion, than doing it in a respectful way; it is not the same to receive communion kneeling or standing up, because all these signs indicate a profound meaning. What we have to grasp is that profound attitude of the man who prostrates himself before God, and that is what the Pope wants.

THE CATHOLIC KNIGHT: So while traditionalist Catholics have been ignored and berated for years, it finally turns out that they've been right all along - at least on this issue.

It's been a long time coming. Once again the Vatican points us back to our historic traditions. We Catholics need to start acting like Catholics again. As the new prefect points out; standing or kneeling for communion is not the same, and it is not just a matter of form. That's why Protestants don't do it. You'll notice that Protestants don't kneel at the consecration, when they visit a Catholic mass, simply because they don't believe in the real presence. They know EXACTLY what kneeling means. To kneel is to show adoration. That's why they don't do it. Funny how so many Catholics seem to have forgotten this when it comes time to receive the blessed sacrament.

So the question is what to do now. Should Catholics take it upon themselves to begin kneeling and receiving on the tongue during the Ordinary Form liturgy, or should they wait for the USCCB to come out with some kind of statement on the matter. If the latter, we may be waiting for a hundred years. Maybe it's time to just do what we know is right, and what the Vatican confirms is right. Based on papal liturgies, and now these words from the CDW prefect, the official position of the Vatican is that Catholics should kneel and receive communion on the tongue. While the official position of the USCCB is that Catholics should stand and receive communion on the hand. So which is it? Do we obey the Vatican or the USCCB? After all is said and done, that's what it comes down to. We must chose between the USCCB, which has no real governing authority, or the Vatican, which is the apostolic See of Peter. What's it going to be? Peter or the USCCB? I know my position. 'The Catholic Knight' will be kneeling and receiving communion on the tongue no matter what mass I'm attending.  The only exception to that would be if kneeling might hold up the line or cause some kind of disturbance.  In which case I will at least receive the sacrament on the tongue while standing, as they do in the Eastern Rite of the Catholic Church.

The point is we've got to take a stand somewhere - (no pun intended). If we don't boldly show our reverence for the eucharistic Lord at mass, when shall we do it? Now I'm not talking about making a scene. The mass should never be a place for calling attention to one's self, but at the same time, it should not be a place for the disciples of modernism to strip our faith of everything we hold dear. Now is as good a time as any to do something about it, and the Vatican has affirmed our right to do it. So let's do it in a spirit of true reverence for our eucharistic Lord, and with no spite or malice toward anyone. Let's all agree to boycott the hand for starters. No more communion in the hand. From now on communion on the tongue in all circumstances. Then when the opportunity presents itself, and doing so will not cause a disruption of any kind, we kneel down to receive the Lord. Is there anybody out there with me on this?
Posted by Catholic Knight at Wednesday, December 17, 2008