Are You Shy About Wearing the Chapel Veil?

THE CATHOLIC KNIGHT: Since first posting on the subject of the chapel veil, 'The Catholic Knight' has received many emails from modest women who have expressed their desire to keep the Biblical custom, but simultaneously feel apprehension, embarrassment, or worry about the potentially negative reaction they may get from fellow parishioners. The common thread in all of these emails seems to center around not wanting to draw attention to one's self.

This is very commendable, because by not wanting to draw attention to one's self, the woman who veils demonstrates that she fully understands the purpose of what the veil is all about. A more recent email inspired me to post on this topic directly.

First and foremost, if you're a woman who fits the description above, know that you're not alone. Your desire to "not cause a scene" is commendable and demonstrates that you fully understand the purpose of the veil to begin with. That means of all people, you are probably the most ready to keep the custom.

Second, we often tend to associate the chapel veil with the pretty lace mantillas made popular in recent times by Traditional Catholics in the Extraordinary Form of the Roman Rite. Many of the beautiful veils are white, or some other stunning color, which do grab attention, especially if nobody else is veiled. Certainly there is nothing wrong with wearing such a lovely prayer cloth, but at the same time, it is not necessary either.

Third, to properly veil, women must understand the reason behind the chapel veil, and this can be found in 1st Corinthians 11. To review let me just outline some highlights of this custom...
There is more than one way to veil.  Keeping the custom doesn't have to mean drawing attention to one's self, and there are so many ways a woman can do it inconspicuously. Here are some suggestions...

Sit in the back of the Church, instead of the middle or front. Almost nobody will notice you there, and the only way you can draw attention is if people actually turn around to look at you. That is not likely to happen. So the back of the church is a good place to start.

The most simple way to keep the custom is with a hat.  Below we have an example of a simple beret.  It's cute and fashionable, but at the same time doesn't stand out much.  In this case below, the beret actually matches this woman's outfit quite nicely.  Many people would probably be unaware she is even keeping the apostolic custom of 1st Corinthians 11.... 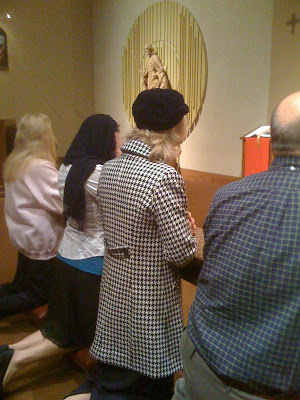 Another way to keep this custom is with a simple scarf or shawl. It doesn't have to be brightly colored or ornate.  In fact, it's probably better if it's not.  This can be worn around the neck or over the shoulders when entering the church, inconspicuously, as you seat yourself in the back of the church quietly, outside of most people's view.  This young woman below gives us an example with a warm shawl she wore on a cold day.  Thin light weight shawls could similarly be used on warm days... 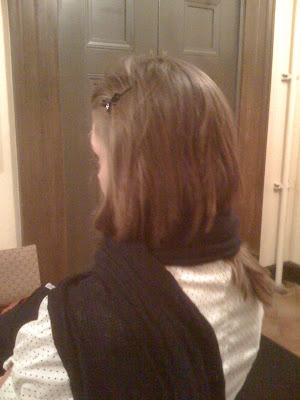 Then, when upon kneeling for prayer, or when mass begins, the scarf or shawl can simply be lifted up over the head without anyone noticing... 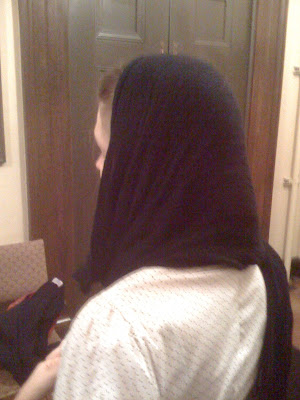 After mass is over, while the priest is recessing back down the isle, the scarf or shawl can be dropped back down over the shoulders before everybody leaves. Thus the woman who does it this way can exit the chapel the same way she came in, with most people being completely unaware of her keeping the Biblical custom.

There is only one time when there would be an exception, and that is during communion. When for a brief time you would be at the front of the church instead of the back. However, when this happens, everyone's eyes are supposed to be downcast and contemplating the real presence of the Lord. If there are people in the pew staring at you, than SHAME ON THEM, not you. You didn't do anything to attract their attention, they are supposed to be contemplating the Lord. The only person who is supposed to look at you is the priest, or the Eucharistic minister, and those people are supposed to be knowledgeable of the veiling custom and not judgemental about it.  Again, you've done nothing to attract attention to yourself.

In almost every case where woman have actually kept the custom, they report to me that they were surprised how little reaction they got all together. They were expecting more, either positive or negative, and what they got was nothing -- literally nothing. It's as if the vast majority of people there didn't care, and most of them didn't even notice. If you're shy, or self conscious about keeping the Biblical custom of veiling, you may want to keep this in mind. Chances are you're far more conscious of it than those around you.

There have been rare cases (very rare) when veiled women have been confronted by other women who disapprove of this practice. If by rare happenstance this happens to you, know that you've done absolutely nothing wrong, and the woman confronting you is acting in an uncharitable, and dare I say unchristian, sort of way. There are people like this. They're called feminists, and they've embraced a philosophy and mindset that opposes the church on so many levels. Often these very same women advocate artificial birth control, believe women should become priests, and think of the male Catholic hierarchy in a negative way. They'll sight all sorts of erroneous reasons why women should no longer veil. If you should find yourself in this rare and unlikely circumstance, here is the proper response...
If you handle it this way, you can be assured that your reward in heaven will be great.  You've just received a bit of persecution for reverencing the Lord, and you handled it with charity and civility.  Meanwhile, the feminist woman who harassed you will be looking very foolish at this point.
If on the EXTREMELY RARE chance that a man actually confronts you over wearing the veil, and I've never heard of this happening, the way to deal with it is virtually identical....
I only outline these responses to be thorough. In all reality you will probably never be confronted with ANY of these situations. Of course there are always those who might have honest and sincere questions about the chapel veil, simply because they don't know anything about it.  You are far more likely to run across someone like this. If anyone asks you for a reason why you wear the chapel veil, simply cite 1st Corinthians 11 and leave it at that.  If someone sincerely wants more details, direct them to this website.
Related Stories...