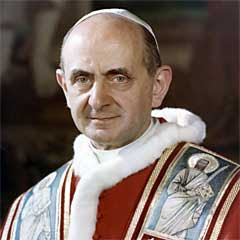 THE CATHOLIC KNIGHT: The pope who concluded the Second Vatican Council had the following to say about it. All Catholics should take note...

"In view of the pastoral nature of the Council, it avoided any extraordinary statements of dogmas endowed with the note of infallibility, but it still provided its teaching with the authority of the Ordinary Magisterium which must be accepted with docility according to the mind of the Council concerning the nature and aims of each document."
-- Pope Paul VI
General Audience, 12 January 1966
source in Italian only

What does this mean? It means that in spite of whatever you've heard, the Second Vatican Council may not be fully infallible -- not according to the pope, and not according to the bishops who participated. It was indeed an ecumenical council, and it was perfectly legitimate.  However, the council can choose when, and when not, to exercise the chrism of infallibility. It just so happened that the bishops of Vatican II chose not to exercise it at all, and this is confirmed in the statement made by Pope Paul VI recorded above. It means that while the documents produced by Vatican II may contain some infallible statements, especially related to matters already defined by previous councils, they do not enjoy the exact same indisputable status as the documents produced by Vatican I and the Council of Trent.

That being said, Vatican II should not be interpreted in a vacuum. Everything contained in the conciliar documents must be interpreted in the context of historic Church tradition, and with the understanding that they can in no way counter or reverse the fully infallible documents produced by Vatican I and the Council of Trent.  It also means the conciliar documents can be debated to a certain degree by the bishops who hold to different opinions of them.  Most importantly, it means they are subject to further definition and clarification by the Holy Father, who can most certainly make these judgements ex cathedra, and therefore infallibly.

So what does this mean for the average Catholic? It means the Church has not changed. Vatican II helped to clarify some pastoral issues that were already being debated in the Church, but it in no way changed the Church. The Catholic Church today is still under the exact same doctrines and teachings as it was before the Second Vatican Council. This is important, because many Catholic parishes today operate as if Vatican II changed everything, when in fact, it did not. If you want to know what the teachings of the Church are today, simply pull out a catechism from the 1950s, and there you will find all the teachings of the modern post-conciliar Church. It's the same today as it was yesterday. Sadly, that might be difficult to see with the quality of catechism publications provided in this post-conciliar world. That's why I keep a hardbound 1950's illustrated catechism in my home to teach my children. So to prevent confusion, it would be prudent for all Catholics to do likewise.  You can acquire one such catechism here, though I'm sure there are many on the market if you know where to look.
Posted by Catholic Knight at Wednesday, January 14, 2009