Pope Pius IX and the Confederacy 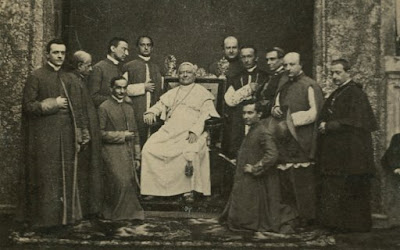 THE CATHOLIC KNIGHT: One of the most overlooked facts of the American Civil War Era is the sympathy the South gained from Europe's most influential monarch - the pope of Rome.

From this we can glean three things about Pope Pius IX...
News of this reached the North, and the Whitehouse was considerably irate about it, prompting a response from the Vatican that the pope's letter did not amount to an "official" recognition in the "formal sense."

The pope's letter to Jefferson Davis was accompanied by an autographed picture of the pope.

There are many possible reasons why this pontiff would be sympathetic to the CSA and her president, but the most likely one was that Pope Pius IX recognized in the traditional Christian culture of the South, a mindset opposed to the advance of liberal Modernism. You see it was Pius IX who composed the famous "Syllabus of Errors," which condemned the Modernist philosophies of liberalism, humanism, secularism and marxism. It is speculated that Pius IX saw in the Confederacy a political movement steeped in European Christian tradition, and therefore a potential ally against liberal modernism on the North American continent. Alas, the Confederacy was ultimately defeated, and President Davis was captured. As the 'Deconstruction' of the South commenced, and Davis awaited his trial, it is understandable why the pope would be sympathetic.

Pope Pius IX was a revered figure in the post war South. General Robert E. Lee kept a portrait of him in his house, and referred to him as the South's only true friend during her time of need. Both Davis and Lee were Episcopalians, as were many Southerners before the War, a denomination which had many things in common with Catholicism before the 20th century influence of Modernism of course. Davis was frequently visited by Southern Catholic nuns during his imprisonment, who delivered messages for him and prayed for his release. He eventually was released, having never stood trial, on the grounds that he committed no real crime. It is believed the majority of justices on the U.S. Supreme Court at that time acknowledged the right of secession.

Southern Americans of today should take comfort knowing that the old Confederacy did have a European friend, and it just happened to be one of the most respected men in the world - not only a head of state, but also the leader of the world's largest Christian religion. The day will come when Pope Pius IX will be canonized as a Saint. He has already been beatified, which puts him well on his way. When that day comes, Southerners will have a special bragging right, not enjoyed by many nations even today. They will not only be able to boast of his sympathies during and after the great War, but they will also have in their collective possession a relic of the man - a hand written letter and autographed photograph.

On The American Civil War:

The American Civil War cannot be cast in the simplistic terms of pro-slavery verses anti-slavery. Lincoln said the war had nothing to do with slavery, and General U.S. Grant said that if he thought the war was about freeing the slaves, he would turn in his sword and fight for the other side. Grant was also a slave owner before, during and after the war.

In contrast, General Robert E. Lee was an abolitionist. Many Southerners shared his views. President Jefferson Davis requested land owners to promise their slaves freedom in exchange for military service. The abolition movement was also growing in the South before the war. The 13th Amendment that legally freed the slaves, (not the Emancipation Proclamation), was actually ratified by many Southern states before many Northern states.

The historical fact is that the Civil War was a conflict between TWO slave nations - the USA and the CSA. Granted, the USA had already banned slavery in some states, but the same movement was growing in some CSA states as well. Historical revisionists have spent a little over 100 years trying to paint the Civil War as some idealistic holy crusade against the injustice of slavery. That image doesn't hold up to the historical facts. The Civil War was mainly about money and power - particularly taxes and investments. What the South did was no different than what America's Founding Fathers did during the American Revolution. Both were acts of rebellion and armed insurrection. Both attempted to establish free and independent nations. Both were dominated by slave economies. The only difference between them is this. In the American Revolution the rebels won. In the American Civil War they didn't.
Posted by Catholic Knight at Monday, February 02, 2009