THE CATHOLIC KNIGHT: Sola Scriptura (Latin for "Scripture Alone") is the Protestant belief that the Bible is the sole authority on all religious matters, and there is no other authority outside of the Bible. It was invented nearly five-hundred years ago by the German Protestant founder, and heretical Augustinian monk, Martin Luther. The doctrine is pure heresy! It is both illogical and unbiblical. It is also the foundation of most Protestant religions, in particular modern Evangelical Fundamentalism. It's become so much a part of Evangelical Fundamentalism that it's frequently taken for granted, even to the point where most Evangelicals are now unfamiliar with the phrase "Sola Scriptura." If you encounter this, and the Evangelical you're speaking with is not familiar with the phrase "Sola Scriptura," simply tell him it's the Protestant "Bible Alone" doctrine, which states that every religious belief must be found in the Bible. He will understand what you're talking about then, since that's been taught to him from a very early age.

Nowhere can Sola Scriptura be found in the Sacred Scriptures. In fact, the Bible says quite the opposite. I repeat. There is no Scripture in the entire Bible that supports this heretical notion of Sola Scriptura. To refute this doctrine you must first understand this, because Protestants will insist on it quite emphatically. It is after all the foundation of their entire religion. Without it - well - they might as well be Catholic, and a good number of Evangelical Protestants know this. That's why they'll defend it tooth and nail, even to the point of getting hostile. But if a Catholic is to win the debate with charity, he must stick to it, not letting the Protestant deviate from the topic. That will be their natural tendency you see. They'll try to level every anti-Catholic allegation in the book at you, whatever it takes, just to get off this topic. It's very uncomfortable to them. You can't let this happen. You must charitably seize control of the debate by letting them know you can't answer any of their questions or concerns about Catholicism until they first provide you with Biblical evidence for Sola Scriptura. To do this, you'll need to know just a few things.

2nd Thessalonians 2:15
Therefore, brothers, stand firm and hold fast to the traditions that you were taught, either by an oral statement or by a letter of ours.

2nd Timothy 2:2
And what you heard from me through many witnesses entrust to faithful people who will have the ability to teach others as well.

1st Corinthians 11:2
I praise you because you remember me in everything and hold fast to the traditions, just as I handed them on to you.

1st Timothy 3:15
But if I should be delayed, you should know how to behave in the household of God, which is the church of the living God, the pillar and foundation of truth.

Second, don't be surprised if the Evangelical you're conversing with throws back a few Scripture passages of his own. You don't need to memorize these, just know how to deal with them. Typically the one they'll use most often is...

2nd Timothy 3:16
All Scripture is God-breathed and is useful for teaching, rebuking, correcting and training in righteousness.

When confronted with this passage, or something similar, assure them that Catholics agree with this 100%, but note the passages specifically says "All Scripture" not "Only Scripture." There is a difference here. Typically Protestants interpret this passage as if it said "only," and that's why they're quoting it to you. You need to point out that is not what the passage says. It says "all" which in no way excludes the authority of Apostolic Tradition or the teaching authority of the Church. Then go back to the verses you memorized above, and ask them again to provide Biblical evidence supporting Sola Scriptura.

Another common passage used is this one...

This one is frequently used as a kind of condemnation against the Catholic Church. The implication of course is that the Church has "added" to the Scriptures with her Traditions, and therefore has violated this passage. However, that is a defunct argument, because the passage clearly condemns adding and subtracting words from the Scriptures. In other words the passage condemns anyone who would alter the text of the Bible. The Catholic Church has done no such thing. It's never done anything like this. If anything the Church has been the greatest guardian of the Sacred Scriptures there ever was. If anything, it is the original Protestants who would fall under the curse of this passage, simply because they DID alter the text. In the 16th century, the so-called Protestant "Reformers" threw seven books out of the Old Testament, and cut several chapters out of the Old Testament books of Daniel and Esther, namely because these books didn't agree with their new "reformed" theology. This is why Protestant Bibles are different from Catholic Bibles. Protestant Bibles have been edited, truncated and shortened to fit Protestant theology.

It is possible you may run across a well schooled Evangelical, who might pull out a slightly more obscure Scripture passage. This one has stumped a lot of Catholics. Again, there is no need to memorize it, just be sure you know how to deal with it if it's used...

1st Corinthians 4:6 - NIV
Now, brothers, I have applied these things to myself and Apollos for your benefit, so that you may learn from us the meaning of the saying, "Do not go beyond what is written." Then you will not take pride in one man over against another.

Now on this surface this looks like a slam dunk for the Evangelical. The passage clearly says "do not go beyond what is written," seemingly a perfect defense for the Protestant doctrine of Sola Scriptura. Or is it? Take a look at the translation notation next to the passage citation above. NIV stands for "New International Version," which is one favorite Bible translation for Protestants. Indeed, a good number of Protestant Bibles translate the passage this way, and sadly even some Catholic Bibles, but is that really what the passage says? The actual Greek for this phrase is "me phroneo hoper hina hos grapho" (phonetically spelled here), which literally translates into "not to set affection above that which is described." Now here the context of the passage becomes really important, because the context of the passage is about men - not Scripture. St. Paul is warning the Corinthians not to take pride in one man over against another. This has nothing to do with Sola Scriptura. What we have here is a bad English translation of the passage, that does not pick up on the context. St. Paul is using a figure of speech to warn against pride. While it's nice to know all of this, I wouldn't expect you to remember it on the fly, so just do this instead. Take note of the above passage. If an Evangelical tries to use it on you, to prove Sola Scriptura, just tell him to read it again in the OLD King James Version...

1st Corinthians 4:6 - KJV
And these things, brethren, I have in a figure transferred to myself and to Apollos for your sakes; that ye might learn in us not to think of men above that which is written, that no one of you be puffed up for one against another.

So you see, when the passage is properly translated, as it is here, it doesn't prove anything - certainly not Sola Scriptura! Since Evangelical Protestants usually consider the old King James Version one of the most authoritative translations in the Protestant world, it's going to be hard for them to refute this one. While you're at it, you also might want to point out that the original 1611 edition of the old King James Version happened to contain all the "additional books" found in Catholic Bibles, and they remained part of the old King James Version until the late 1800s, when they were removed for some mysterious reason. However, if your Evangelical friend wants an authentic and complete King James Bible, with all the original books, he can special order one through Amazon.Com. Just tell him to search for "King James Bible 1611." That is unless he likes having a truncated and censored version of the Scriptures.

Third, when dealing with Evangelicals, it's important to stress how important the Scriptures are to Catholics, and that everything we do in the Catholic Church revolves around them. However, it is the Church that is the "pillar and foundation of truth" not the Bible, because that's what the Bible says about the Church (refer to memorized passage above). Therefore, the Church uses Apostolic Tradition to help interpret the Scriptures, just as the Scriptures instructed (again refer to memorized passages above). Granted, I wouldn't expect you (or anyone) to remember all of this after just one reading. That's why you should probably email this blog entry to yourself, or print out a hard copy to study.

Fourth and finally, followup is important. You don't want your Protestant friend to get away and forget everything you've told him. Besides, he may want to look up those passages you cited, but forgot to write them down. That's where a followup tract comes in handy. I recommend you order the following tract from GrottoPress.Org. Just buy as many as you can afford. They're pretty cheap... 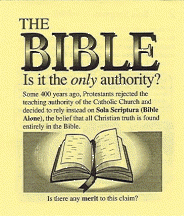 Order Here
This little tract won't contain all the information I've provided here, but it does cite some of the passages we've covered, and has a pretty concise message to it. It will make an excellent followup to any conversation you have with an Evangelical (or any Protestant) on the topic of Sola Scriptura. I recommend you buy some, and keep them in your pocket, purse, car or anywhere you can reach them at a moment's notice.

Remember, it's important to keep your Evangelical friends on topic. Focus on Sola Scriptura like a laser beam. Don't let them get you onto anything else until that issue is settled. It's not settled until they come to the painful realization that what they've been taught about the Bible is wrong. This probably won't happen easily, and it may not even happen right away. Remember, charity means patience. Be firm, but give them time to absorb this difficult information. It will turn their world upside down, and that's why they resist it so much. However, it's reasonable to assume that some of your Evangelical friends will eventually come to terms with the truth, and when they do, they'll be back. When they've finally accepted that Sola Scriptura is unbiblical, then they are ready to talk about the other questions and concerns they have about Catholicism. So while you're waiting, you had better start studying up on your Catechism, and get ready to answer some tough questions, because you'll have a new convert on the way.
Posted by Catholic Knight at Wednesday, September 23, 2009