The Weakness of Democracy 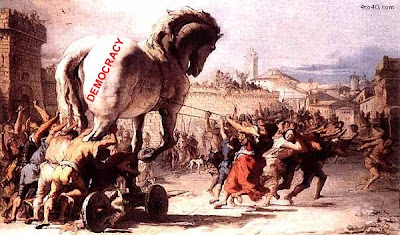 THE CATHOLIC KNIGHT: "It is the natural progression of all representative government to inch toward socialism and tyranny." Yes, you can quote me on that. Indeed there are short periods of time when things move too fast, and the people temporarily return to their traditional sensibilities, but this is only a setback. It doesn't last. In time the steady march toward socialism and tyranny will continue. This is the lesson of the last 100 years.

(Screwtape Proposes a Toast, 1959) - Hidden in the heart of this striving for Liberty there was also a deep hatred of personal freedom. That invaluable man Rousseau first revealed it. In his perfect democracy, you remember, only the state religion is permitted, slavery is restored, and the individual is told that he has really willed (though he didn’t know it) whatever the Government tells him to do. From that starting point, via Hegel (another indispensable propagandist on our side) we easily contrived both the Nazi and the Communist state….

Democracy is the word with which you must lead them by the nose…. [T]hey should never be allowed to give this word a clear and definable meaning. They won’t. It will never occur to them that democracy is properly the name of a political system, even a system of voting, and that this has only the most remote and tenuous connection with what you are trying to sell them. Nor of course must they ever be allowed to raise Aristotle’s question: whether “democratic behaviour” means the behaviour that democracies like or the behaviour that will preserve a democracy. For if they did, it could hardly fail to occur to them that these need not be the same.

You are to use the word purely as an incantation; if you like, purely for its selling power. It is a name they venerate. And of course it is connected with the political ideal that men should be equally treated. You then make a stealthy transition in their minds from this political ideal to a factual belief that all men are equal…. As a result you can use the word democracy to sanction in his thought the most degrading (and also the least enjoyable) of human feelings. You can get him to practise, not only without shame but with a positive glow of self-approval, conduct which, if undefended by the magic word, would be universally derided.

The feeling I mean is of course that which prompts a man to say I’m as good as you….

No man who says I’m as good as you believes it. He would not say it if he did. The St. Bernard never says it to the toy dog, nor the scholar to the dunce, nor the employable to the bum, nor the pretty woman to the plain. The claim to equality, outside the strictly political field, is made only by those who feel themselves to be in some way inferior. What it expresses is precisely the itching, smarting, writhing awareness of an inferiority which the patient refuses to accept.

Now, this useful phenomenon is in itself by no means new. Under the name of Envy it has been known to humans for thousands of years. But hitherto they always regarded it as the most odious, and also the most comical, of vices. Those who were aware of feeling it felt it with shame; those who were not gave it no quarter in others. The delightful novelty of the present situation is that you can sanction it — make it respectable and even laudable — by the incantatory use of the word democratic.

Under the influence of this incantation those who are in any or every way inferior can labour more wholeheartedly and successfully than ever before to pull down everyone else to their own level. But that is not all. Under the same influence, those who come, or could come, nearer to a full humanity, actually draw back from fear of being undemocratic…. They might (horror of horrors!) become individuals….

Meanwhile, as a delightful by-product, the few (fewer every day) who will not be made Normal or Regular and Like Folks and Integrated increasingly become in reality the prigs and cranks which the rabble would in any case have believed them to be. For suspicion often creates what it expects…. As a result we now have an intelligentsia which, though very small, is very useful to the cause of Hell.

But that is a mere by-product. What I want to fix your attention on is the vast, overall movement towards the discrediting, and finally the elimination, of every kind of human excellence – moral, cultural, social, or intellectual. And is it not pretty to notice how “democracy” (in the incantatory sense) is now doing for us the work that was once done by the most ancient Dictatorships, and by the same methods?…

Once you have grasped the tendency, you can easily predict its future developments; especially as we ourselves will play our part in the developing. The basic principle of the new education is to be that dunces and idlers must not be made to feel inferior to intelligent and industrious pupils. That would be “undemocratic.” These differences between pupils – for they are obviously and nakedly individual differences – must be disguised. This can be done at various levels. At universities, examinations must be framed so that nearly all the students get good marks. Entrance examinations must be framed so that all, or nearly all, citizens can go to universities, whether they have any power (or wish) to profit by higher education or not. At schools, the children who are too stupid or lazy to learn languages and mathematics and elementary science can be set to doing things that children used to do in their spare time…. Whatever nonsense they are engaged in must have – I believe the English already use the phrase – “parity of esteem”…. Children who are fit to proceed to a higher class may be artificially kept back, because the others would get a trauma…by being left behind. The bright pupil thus remains democratically fettered to his own age group throughout his school career….

In a word, we may reasonably hope for the virtual abolition of education when I’m as good as you has fully had its way. All incentives to learn and all penalties for not learning will be prevented; who are they to overtop their fellows? And anyway the teachers – or should I say, nurses? – will be far too busy reassuring the dunces and patting them on the back to waste any time on real teaching. We shall no longer have to plan and toil to spread imperturbable conceit and incurable ignorance among men. The little vermin themselves will do it for us.

Of course, this would not follow unless all education became state education. But it will. That is part of the same movement. Penal taxes, designed for that purpose, are liquidating the Middle Class, the class who were prepared to save and spend and make sacrifices in order to have their children privately educated. The removal of this class, besides linking up with the abolition of education, is, fortunately, an inevitable effect of the spirit that says I’m as good as you. This was, after all, the social group which gave to the humans the overwhelming majority of their scientists, physicians, philosophers, theologians, poets, artists, composers, architects, jurists, and administrators. If ever there were a bunch of stalks that needed their tops knocked off, it was surely they. As an English politician remarked not long ago, “A democracy does not want great men.”

We, in Hell, would welcome the disappearance of democracy in the strict sense of that word, the political arrangement so called. Like all forms of government, it often works to our advantage, but on the whole less often than other forms. And what we must realize is that “democracy” in the diabolical sense (I’m as good as you, Being Like Folks, Togetherness) is the fittest instrument we could possibly have for extirpating political democracies from the face of the earth.

For “democracy” or the “democratic spirit” (diabolical sense) leads to a nation without great men, a nation mainly of subliterates, full of the cocksureness which flattery breeds on ignorance, and quick to snarl or whimper at the first sign of criticism. And that is what Hell wishes every democratic people to be. For when such a nation meets in conflict a nation where children have been made to work at school, where talent is placed in high posts, and where the ignorant mass are allowed no say at all in public affairs, only one result is possible….

It is our function to encourage the behaviour, the manners, the whole attitude of mind, which democracies naturally like and enjoy, because these are the very things which, if unchecked, will destroy democracy. You would almost wonder that even humans don’t see it themselves. Even if they don’t read Aristotle (that would be undemocratic) you would have thought the French Revolution would have taught them that the behaviour aristocrats naturally like is not the behaviour that preserves aristocracy. They might then have applied the same principle to all forms of government….

The overthrow of free peoples and the multiplication of slave states are for us a means (besides, of course, being fun); but the real end is the destruction of individuals. For only individuals can be saved or damned, can become sons of the Enemy or food for us. The ultimate value, for us, of any revolution, war, or famine lies in the individual anguish, treachery, hatred, rage, and despair which it may produce. I’m as good as you is a useful means for the destruction of democratic societies. But it has a far deeper value as an end in itself, as a state of mind which, necessarily excluding humility, charity, contentment, and all the pleasures of gratitude or admiration, turns a human being away from almost every road which might finally lead him to Heaven.