Married Christians Less Likely To Divorce If They Practice Catholicism 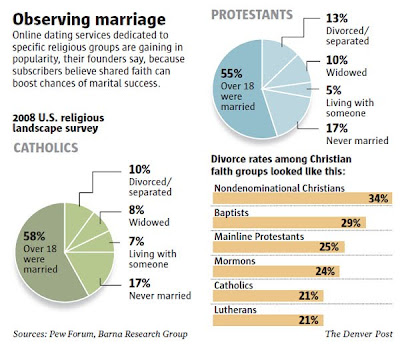 What I find interesting about these statistics is that the more "ancient" and "traditional" the form of Christianity, the more likely a marriage is to survive. Granted, these are statistics, and based on an overall picture. We cannot apply them to each and every individual couple, and of course, there are always exceptions to every statistical rule. However, when we're looking at odds alone, we find that the best chance a marriage has at survival, in our incredibly decadent culture, is for the couple to practice some form of Christianity. However, of all the different forms of Christianity, Catholicism is one of two that is MOST LIKELY to increase the chances of a marriage survival. The only Protestant form of Christianity that compares is Lutheranism.