When Can A Priest Say The Traditional Latin Mass? 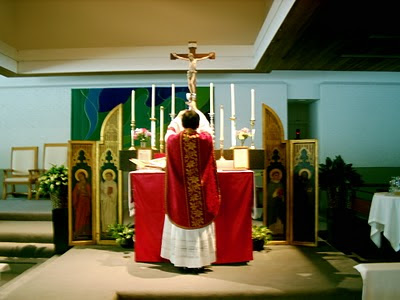 (Telegraph) - Good news from Rome: the Vatican has further underlined the freedom of priests to celebrate Mass in the Extraordinary Form whenever they choose. Two important points have been clarified by Ecclesia Dei, which will make it more difficult for the English, Welsh and above all Scottish bishops to stall the implementation of Summorum Pontificum:

1. A priest does NOT have to be approached by a “stable group” of the faithful in order to schedule a PUBLIC celebration of the Extraordinary Form – he may choose to do so, for example, in order to introduce his parishioners to this ancient form of the Roman Rite. Or because it’s his aunt’s birthday. Any reason, really.

You can find more details of the Ecclesia Dei ruling here, on the excellent New Liturgical Movement blog....

THE CATHOLIC KNIGHT: Rome has spoken again. While rebel priests and bishops from all over the western world seek new ways to twist canon law and thwart the pope's will, the Vatican has now ruled the following. Any Roman Rite Catholic priest may celebrate the Traditional Latin Mass (Tridentine mass, Extraordinary Form or Usus Antiquior) or "Ancient Use" at any time, whenever he wants, for any reason, or no particular reason at all. It can be done privately (with or without guests), or publicly, and it may replace any ordinary mass at any time. The one and only requirement is that the priest be competent to celebrate it, and there are many means through which a priest may attain competency, either through training videos or short workshops.

Pope Benedict XVI has effectively given the Usus Antiquior ("Ancient Use") just as much freedom in the modern Church as the ordinary modern mass. This freedom will prove essential to younger priests, just coming out of the seminaries, who tend to be more traditional in their liturgical practices, and will immediately be confronted by retro-1970s priests serving as rectors, chancellors and bishops. The retro-1970s clergy tend to express an open hostility toward the Usus Antiquior and/or anything having to do with traditional liturgical practices. For years now, young priests have found themselves immediately immersed in a culture of intimidation if they should display any traditional tendencies in diocesan parishes. "When you're fresh out of the seminary, and trying to please your superiors, there is tremendous pressure to just go along with the flow and maintain the status quo" said one newly ordained priest to 'The Catholic Knight' under condition of anonymity.

That "pressure" may still be there, but the "power" of these retro-1970s throwbacks to do any harm has now been significantly diminished. Young priests, fresh out of the seminaries, can now offer the Usus Antiquior whenever they want, and while they may incur the frowns and glares of their superiors, there is nothing they can lawfully do to stop them anymore. This most recent act by the Vatican signifies that the retro-1970s post-conciliar neopriests are now finally being put out to pasture.
Posted by Catholic Knight at Thursday, February 18, 2010