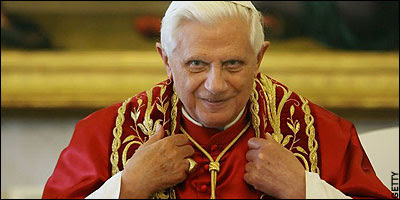 Download Motu Proprio, Pope's Letter with Q&A from US Bishops

THE CATHOLIC KNIGHT: After having been repressed for nearly 40 years, the Mass of Saint Pius V (commonly known as the "Tridentine Mass" or "Classical Latin Mass") has been liberated by Pope Benedict XVI - formerly Cardinal Joseph Ratzinger. For over three decades, the vast majority of Catholics around the world have been under the false impression that the reforms of the Second Vatican Council (Vatican II: 1962-1965) dispensed of the old mass (Tridentine) and replaced it with the new mass (commonly known as the "Novus Ordo" or "Mass of Pope Paul VI"). Not so! Vatican officials have in recent years repeatedly said the old rite was never abolished, and can still be celebrated anywhere in the world, with the permission of the local bishop. The late Pope John Paul II issued his own Motu Proprio regarding this same matter on July 2, 1988, establishing the norms for how this takes place.

However, it would appear that in most diocese throughout the world, particularly the United States, many bishops simply ignored Pope John Paul II and refused to grant permission to celebrate the Tridentine mass when it was respectfully requested by the faithful. The seriousness of this problem led to the alienation of many Catholics from their historic roots, and the rapid growth of a semi-schismatic group known as the "Society of St. Pius X" (SSPX). The SSPX currently operates outside the canonical structures of the Roman Catholic Church, celebrates the Tridentine mass exclusively, and totally rejects the reforms of Vatican II. The Motu Proprio issued by Pope Benedict XVI today, entitled Summorum Pontificum (which means "Of the Supreme Pontiffs"), builds upon Pope John Paul II's decision to permit greater freedom and latitude for the Tridentine mass. It does so by insisting that all local bishops grant permission for the faithful to celebrate the Tridentine mass, and if a bishop is unable to comply, the faithful have recourse to the pontifical commission of Ecclesia Dei, which will endeavor to "help" that bishop with this problem.

Over the last three decades, the Tridentine mass has become something of an anathema to liberals within the Church, many of whom find it intolerable. Usually those most hostile toward the old mass, also tend to be those most permissive toward fanciful innovations and liturgical abuse within the new mass. The liberal mindset follows the modernist presumption that Vatican II dispensed of the old Catholic Church, and created an entirely new one where "anything goes." The introduction of the Novus Ordo mass in 1970, along with the simultaneous repression of the Tridentine mass, unfortunately served to fuel this false presumption for decades.

Therefore this papal decision sends a virtual "death blow" to the liberal ideology of liturgical innovation and the modernist influence over the mass. Thus allowing the tide of historic Catholic tradition to flood back into the Church, the local congregation, and every individual Catholic willing to receive it. This restoration of the Tridentine mass is sure to exert a "gravitational pull" on the Novus Ordo. By that, I mean the Novus Ordo (commonly celebrated in the vernacular languages) is bound to come into greater continuity with the historic traditions and customs of the old Tridentine mass. Over time the two will remain distinct, but the continuity between them will be more obvious. Many of the customs and traditions of the Catholic mass, which were never intended to be thrown out, will slowly return to the Novus Ordo. This is part of Pope Benedict XVI's greater plan of liturgical renewal. Such a scenario may be intolerable to hard-core liberals, and because of that, we might expect to see a small exodus. However, Pope Benedict's intent is to put an end to disputes over the mass, and restore tranquility to the liturgical scene. His accompanying four-page letter chides hot tempers on both sides of the debate, calling for peace and harmony as both traditional and contemporary Catholics learn from each other, recognizing that no harm can come from historic traditions that have always been observed. He calls contemporary Catholics to greater fidelity to the authorized rubrics of the Novus Ordo mass. Furthermore, he insists that both masses (old and new) are part of the same Roman Rite, and that no rupture exists between them. A new vocabulary is called for in referring to the two masses. For the Novus Ordo is now to be referred to as the "Ordinary" form of the Roman Rite, while the Tridentine is to be called the "Extraordinary" form of the Roman Rite. (This blogger will henceforth attempt to honor the pope's request.)

There is an ancient Catholic maxim that says; "As the Church worships, so it believes, and so it behaves." In other words, worship shapes faith and behavior. The return of historic tradition, both in the revival of the Extraordinary form of the mass, and it's gravitational pull on the Ordinary form of the mass, has leveled the playing field. The traditional arm of the Church can now operate freely to effect the "reform of the reform" sought by Pope Benedict XVI. This is a pivotal moment in post-conciliar history. A fatal blow has been dealt to the liberals corrupting the Catholic Church and twisting the meaning of Vatican II. Today is "D-Day!" What Pope Benedict's Motu Proprio did today was the equivalent of the Normandy invasion in the liturgical sense. The liberal war on our historic Catholic Tradition is far from over, but today we have seen the "beginning of the end." Historic Catholic Tradition has finally been reintroduced to the Church in the revived Extraordinary form of the mass, and with it, the Ordinary form will soon be elevated to its intended glory. All of these things can only serve to make both the clergy and the laity more conservative, more orthodox and ultimately more Catholic.

Related Stories:
Differences Between Tridentine & Modern Mass
The Failures of Vatican II
Some Examples of Liturgical Abuse
How to Dress for Mass
How to Transform an Alter
How to Gregorian Chant
Traditional Latin Mass Explained
Priest Training Workshops
Prayer Shawls - A Sign of Class, Beauty and Courage
Wear Your Mantilla With Pride
Tridentine Mass is ONLY Solution to the SSPX Problem
The Mass Proscribed by Vatican II
The Real Vatican II
Is the Tridentine Mass A Key to Christian Unity?
Posted by Catholic Knight at Saturday, July 07, 2007