American Feminism Is A Fraud ! 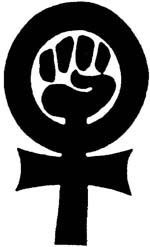 THE CATHOLIC KNIGHT:  Most American women are generally conservative in their personal lives and their political ideology.  That's why the National Organization for Women (N.O.W), and nearly all American feminist groups, actually oppose their success - especially in politics.  In fact, the only women these feminists groups support are those who subscribe to a far Left social and political ideology.  American Feminism is the laughingstock of the whole world, especially in places like Europe, where women are generally supported by feminists regardless of their social and political beliefs.  (As is evident in this story from the U.K.)  You see in Europe, feminism is about women - all women.  What a novel concept!  Not so in the United States.  Here in America, feminism actually has nothing to do with women at all.  In the good ol' U.S.A., it has more to do with left-wing politics.  Feminists will support women ONLY when they subscribe to a far left political ideology.  If they don't - they're hung out to dry.  This is the only thing that can explain why the National Organization for Women (N.O.W.) is opposing the candidacy of a women to the second highest office in the land...

(Sydney Morning Herald) - You would think the prospect of a woman in the White House as US vice-president - and a working mother to boot - would be welcomed by feminists. Not one bit.

The excoriation of the Alaskan Governor, Sarah Palin, since John McCain unveiled her as his surprise running mate last week just goes to show that establishment feminists are only champions of women who subscribe to a narrow set of left-wing positions. They despise conservative women more than any man, and civil wars are always the most vicious.

Which is why the largest American feminist group, the National Organisation for Women, wasted no time issuing a statement saying it did not endorse Palin because she was not the "right woman" and did not speak "for" women....