Media Zeros In On Palin For Hatchet Job 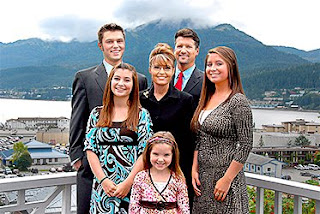 THE CATHOLIC KNIGHT: As I predicted, the Christophobic Leftist media is attempting to zero in on Governor Sarah Palin for a hatchet job against her character and her family. Immediately after the announcement of John McCain's selection of her for vice presidential nominee, MSNBC pounced into action...

(WorldNetDaily) - From the very first moment that John McCain's selection of Sarah Palin for his Republican running mate was announced, the MSNBC news network was engaged in a deliberate attempt to smear the Alaska governor, according to Fox News host Bill O'Reilly.

During Friday night's edition of "The O'Reilly Factor," the Fox anchor displayed MSNBC's "breaking news" graphic, which ran the message, "How many houses does Palin add to the Republican ticket?"...

Then, that very same afternoon, Alan Colmes, a liberal commentator on FoxNews, posted an entry on his blog in which he accused Palin of having a shotgun wedding twenty years ago to avoid an illegitimate child (read source here). He titled the post "Conservative Family Values," in what was an obvious jab at her Evangelical Christian beliefs. Colmes' theory turned out to be total bunk, and his reputation was further tarnished because of it, but this little episode was just a tiny foretaste of what would come over the weekend. With Colmes' Christophobic attack on Palin, the initial salvo defaulted to that classic "family values" line, in which Leftists attempted to muddy the Palin name on moral issues (which they care little about to begin with), for the sole purpose of trying to turn conservative Christian voters away from Sarah Palin.

Colmes may not have intended it, but his blog post sent a political shockwave into the Internet blogosphere. It was a shockwave that other Liberal bloggers took as a permission slip to do whatever they wanted. They sprung into action immediately, concocting a complete fabrication about the legitimacy of Palin's fifth child, Trig, who was born just four months ago. The fabrication was probably developed around some rumors these bloggers may have heard from Alaska. Rumors that centered around Palin's seventeen year old daughter, Bristol, who either is, had been, or might be, pregnant. Rather than investigating these rumors, the leftist bloggers simply filled in the details with their own imagination. By the time they were through, four month old Trig was now Bristol's son, and Bristol's alleged "pregnancy" had been hidden by Sarah Palin herself. The Alaska governor was accused of faking her own pregnancy, and then passing Bristol's child, Trig, off as her own! Most sensible folks would dismiss this sort of stuff as the tabloid ramblings of frustrated political hacks. But it wasn't long before our mainstream press was looking into the matter and asking questions. As word of this got out, the Palin family decided to release some personal family information, which was no secret in Alaska, and was already well known by the McCain campaign during the vetting process that eventually led to Palin's selection as McCain's running mate. The press release read as follows...

(Washington Post) - "We have been blessed with five wonderful children who we love with all our heart and mean everything to us," said Sarah and Todd Palin in a statement. "Our beautiful daughter Bristol came to us with news that as parents we knew would make her grow up faster than we had ever planned. We're proud of Bristol's decision to have her baby and even prouder to become grandparents. As Bristol faces the responsibilities of adulthood, she knows she has our unconditional love and support."

As news of this broke, liberal bloggers on the Internet were humiliated but defiant. Now the truth was out and they looked like idiots. There was no cover-up, no baby-switching, and no fake pregnancy.  The real story of Bristol Palin's teen pregnancy is not quite as scandalous, but nevertheless something for the Leftist Christophobic media to sink their teeth into. Unlike media Leftists, people who really understand Christianity know that this sort of thing happens in all families - including Christian families. While this is not the ideal situation based on Christian morality, the real test of one's Christian faith comes in how one deals with it once it happens. The Christian response is to accept responsibility for one's actions, not run away from it, as so many Liberals advocate through their sacrament of abortion-on-demand. In the Palin teen pregnancy story, what we have is an example of how Christians are supposed to deal with the problem when teenagers commit the sin of sexual impatience. They own up to their actions, acknowledge their faults, and take responsibility for the consequences. Bristol Palin is going to keep her baby, and marry the father. She and her new husband will make whatever sacrifices they must to raise their newborn child, and in doing so they will give testimony to the sanctity of human life as well as the practical maturity provided by their Christian faith. People who don't understand Christianity, (most of the Liberal media and Leftist bloggers for example), will point fingers at the "bastard child," and the "fornication" of two "religious hypocrites" in the Palin family. In doing so they only prove that they don't have a clue, and they have no concept of what the Christian religion is really about. A "practicing Christian" is by no means a "perfect Christian." If one were already "perfect" then one wouldn't need to "practice." The definition of a "practicing Christian" is one who takes the teachings of Christianity seriously, and is attempting to live by them, in spite of one's faults and mistakes. By definition, "practicing Christians" don't attempt to redefine Christian morality to fit their own sinful habits, nor do they try to "lower the bar" of Christian standards just because they can't seem to meet them. Rather, a "practicing Christian" just keeps trying to get it right, over and over again, until eventually he (or she) is successful. The duty of Christian families is to provide love and support to their family members, even when they fail, while at the same time encouraging them to take responsibility for their failures, and to keep reaching upward toward the ideal standard. The Palin family has done just that. It is a perfect example of how Christians deal with personal failings, and how their faith helps them recover without lowering the standard.

The reason why 'The Catholic Knight' brings this to you is threefold. I wish to first call your attention to the insidious and shameful way some Christophobic left-wingers will think nothing of fabricating complete lies if they believe it might help them politically. Second, some members of the mainstream media will gladly sacrifice their objectivity, and therefore their credibility, for the purpose of political gain. Third and finally, prepare for it to get worse -- a lot worse.

It's the third point I want to touch on the most, because I want to prepare my readers for the next logical step. The Leftist mainstream media is incredibly Christophobic. By that I mean they fear Christian political involvement, and especially a political alliance between conservative Evangelicals and practicing Catholics. They know that any such social alliance on political matters will seriously threaten their Leftist political agenda. The fact that Obama hasn't done nearly as well in the polls as he should be doing at this time is making them nervous. For the first time this election year, it looks as if it is possible McCain might actually win, and that simply will not be tolerated. The media will go after Sarah Palin ruthlessly on the national level, just as they did in Alaska during her election bid for governor of that state in 2006. Palin is McCain's biggest political asset right now, so in order to hurt McCain, the media must attack Palin. Right now they're just going after her personal family baggage. As soon as they realize that this isn't working, they'll take it to a different area of her life, and one in which they feel far more comfortable attacking -- her religion.

The purpose of a religious attack on Palin is very specific. The Leftist media is going to attempt to crack a social alliance between Evangelicals and practicing Catholics. The idea being to make Palin the focus of controversy between these two groups, and "hopefully" break a Republican political stronghold.

It is the opinion of this blogger that in a very short time, Sarah Palin's church will come under media scrutiny, and as soon as they think they have the dirt they need, they're going to take it right to the public, but it will be especially directed toward Catholics. I believe the media will try to do the exact same thing it did last year with Governor Mike Huckabee. They will try to pit Christian voters against each other. My guess is they'll find some obscure quote from the pastor of Palin's Evangelical church that appears to contradict the teachings of the Catholic Church in some way. Then they'll present it to the world as something like "Palin's Church Hate's Catholics." The stories they publish will question the role of religion in Palin's life and label her religion as "extreme," with the hope of polarizing the practicing Christian vote enough to turn Catholics against Evangelicals and vice versa. Beware of the coming attack, and whatever you do, don't take the bait. It is designed to manipulate us.
Posted by Catholic Knight at Monday, September 01, 2008