Britain Falls To Islam - Sharia Law Enacted - The Queen Must Be Mad! 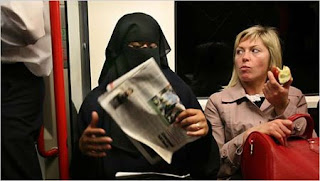 (Times) - ISLAMIC law has been officially adopted in Britain, with sharia courts given powers to rule on Muslim civil cases.

The government has quietly sanctioned the powers for sharia judges to rule on cases ranging from divorce and financial disputes to those involving domestic violence.

Rulings issued by a network of five sharia courts are enforceable with the full power of the judicial system, through the county courts or High Court....

THE CATHOLIC KNIGHT: Behold the beginning of the end for Western civilization. Liberal Secular Humanism has finally reached it's logical conclusion. The fruit of Liberalism is Islam! 'The Catholic Knight,' along with many others, has been warning of this for three years now. As Liberals try to sterilize society of all Christian influence, as Secular governments continue to aid and abet them in this endeavor, and as churches compromise their morality to accommodate this trend; the final result is a spiritual vacuum in the collective society. Once that vacuum exists, the laws of nature take over.

Nature abhors a vacuum. That's a fundamental law of this universe. Wherever a vacuum exists, nature seeks to fill it as quickly as possible - with literally ANYTHING! The same holds true with human conscience and man's religious nature. When a society becomes devoid of religious conscience, human nature (which is very much a part of mother nature) seeks to fill it as quickly as possible - with literally anything. Thanks to liberal Secular Humanism, Europe has been devoid of it's historic Christian conscience for nearly half a century now. This is especially true in Great Britain, where the number of practicing Christians, who attend a church weekly, has now been reduced to a mere 10% of the British population. This Christian decline, spanning four decades, was accompanied by a dramatic increase in occult practices in the U.K..   It appeared that even in a religiously sterile environment, a good number of Brits still found a way to exercise their natural need for spirituality. Witchcraft (Wicca) and New Age occultism blossomed in England during the latter half of the 20th century. But that eventually gave way to a something much bigger and more organized - the rise of British Islam!

How could this happen!?!

With all civil remnants of Christianity having been neutered, and the churches of England having debased themselves with elements of Liberalism, the English population was ripe for the picking. Foreign immigrants from Africa and Asia were imported to the British Isles (as well as many other European nations) to shore up the population gap created by the Liberal exercises of abortion and artificial contraception. This was necessary to keep the country's social security system afloat. (In order for social security to work, you have to have an increasing population.) Since you can't force a liberal society to make babies, you've got to get your future taxpayers from somewhere, and immigrants from Africa and Asia were more than willing to fill the gap. Unfortunately, these immigrants also brought their religion with them - Islam.  Muslim immigrants to Britain reproduced at four to five times the rate of native British. So while the practice of British Christianity was shrinking, the practice of British Islam was expanding at an exponential rate. As Islam was introduced to a spiritually hungry British population, a growing number of native Brits began to convert, thus increasing the exponential growth of Islam in the British Isles to include home-grown "White Muslims" (as they were sometimes called). Currently, the number of practicing Muslims in the U.K. now exceeds the number of practicing Christians. Along with this demographic shift came a growing clamor for Sharia Law. That's because English Common Law, steeped in Christian morality and watered down by Secularism, is not good enough for the average Muslim. They demanded to be accommodated, and treated differently than the average Brit. They wanted their women to submit to Islamic laws, and their children to be raised and disciplined according to Islamic practices. A growing fear of social unrest (i.e. "Muslim Riots") has been driving the British government's quiet moves to pacify them. The institution of Sharia Law across the entire country, to those who want to submit to it, was not the first step toward this goal, and it certainly won't be the last.

The queen must be mad!!!

Yes, she is, but it's not just her. It's her Prime Minister and the entire British Parliament, as well as much of the political elites in the U.K..   Anyone who would surrender the sovereignty of one's national laws, to the religious institutions of a foreign culture, is perfectly insane, without a doubt.
They're mad with Liberalism, to the point where they've gone beyond Secular Humanism, allowing it to be abandoned and replaced with Islamic Sharia Law. Yes, the queen could have stopped this from happening. Though mostly thought of as a figurehead monarchy, the queen still reserves some constitutional powers which can be exercised at her discretion. One would think that if the entire House of Lords and Commons had gone completely mad enough to allow this, the queen herself might have stepped in to save England from this catastrophic historical blunder. No. Instead, she quietly sat in her palace and did nothing - absolutely nothing. Sadly, the English monarchy has just proved it's worthlessness - again.

So now the birthplace of our culture, the cradle of English civilization, has given itself over to Islam - not just culturally, but legally too. Currently, submission to Sharia Law in the U.K. is voluntary, but as the Islamic population of Britain continues to explode at an exponential rate, and the influence of Christianity continues to subside, how long can we really expect it to remain voluntary? How long before Muslims gain control of the Parliament? How long before they gain control of the Prime Minister's office? How long before they gain control of the English crown itself!?! When they do, what can we expect? I think a quick look at other nations that use Sharia Law will give us the answer to that question.

Nature abhors a vacuum. Human nature demands a religious conscious - some form of spirituality. Liberals love Secular Humanism, because it gives license to their sexual liberation. But Secular Humanism seeks to purge human society from all influences of the Christian religion. History is now demonstrating to us that the fruit of Liberalism is Islam. That's because when Liberals get what they want, Secular Humanism wipes all remnants of Christianity from public view. When that happens a spiritual vacuum is created, and as we all know, nature abhors a vacuum. It seeks to fill it with anything it can find, and Islam is more than ready to rise to the occasion. So Liberals eventually find themselves forced to embrace Islam, partly because of politically correct nonsense, and partly because they fear what Muslims will do if they don't. It's a natural progression, just as natural as nature itself. The only thing standing between Liberals and Islam is a healthy and robust Christianity. Eliminate Christianity from the scene, and it won't be long before it's a public call to prayer five times a day, and our daughters are forced to cover their faces.

We know that other European nations are already going down the same path, but I'm interested in who's next in the English-speaking world. Will it be South Africa, Australia, New Zealand, or Canada!?! What about the United States? Thankfully, the U.S.A. has a steady flood of illegal aliens from Mexico streaming into the nation - most of them Catholic. These people may be illegal now, but many of their children will eventually be taxpayers, and that may help keep the social security system afloat without having to import Muslim immigrants from Africa and Asia.

Liberalism has it's price. With the rise of Sharia Law in the U.K., we've now seen what it is. The only question that remains is, are we ready to pay it?  Believe it or not, there is a way out of this, even for Britain.  We must return to our Catholic roots, and take ALL the sexual ethics of the Church seriously.  Only then can there be a Christian revival in Europe, and the Islamic threat can at least be contained for the short term, and hopefully overcome in the long term.  Outside of this, there is no other way.
Posted by Catholic Knight at Tuesday, September 16, 2008