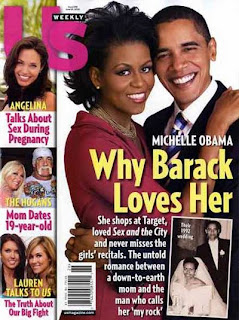 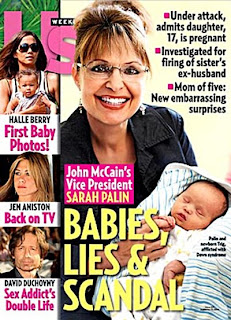 THE CATHOLIC KNIGHT: The above covers of US magazine are just an example of how bad it can get. The mainstream media is clearly rooting for Obama in this election, and they'll stoop to whatever lows it takes to get him elected. US magazine certainly wasn't the first media outlet to throw its support behind Obama, and it certainly won't be the last. Left-Wing media bias is no secret. During the 1990s, surveys of the political views of major media outlets revealed that over 80% of all those polled voted for Bill Clinton in 1992 and 1996, while the former president received less than 50% of the vote in the general population. Clearly, the media is not representative of how most Americans think and feel. So this should come as no surprise to us.

Where are the feminists in all this? They are strangely silent. Why? I dare say it's because the American Feminist Movement isn't really about women. It's about pushing a liberal political agenda. Should a conservative woman ever come under public attack by degrading, sexist bigots, they'll just close their eyes and look the other way. If they really cared about women, all women, they would put a stop to all this nonsense, and force the media to focus on the issues, rather than the tabloid mudslinging.

So prepare for it to get worse, much worse, and just remember this. If you're a woman who comes under the attacks of degrading, sexist bigots who try to smear your good name, and you happen to be a conservative too, then don't expect any help (or support) from ANY feminist organization throughout the United States. You're on your own baby!

If your a Christian (a Catholic or Evangelical), then just keep in mind that the media attack on Governor Palin is really on you and your beliefs. Watch closely at the depths they will sink to slander the good name of anyone who would dare use the power of government to defend the unborn. Remember, they would slander you just as well (if not worse) should you ever rise to prominent position.  The mainstream media wants to keep Pro-Life religious people where they think they belong - out of politics entirely.
Posted by Catholic Knight at Thursday, September 04, 2008