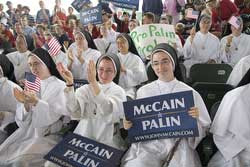 THE CATHOLIC KNIGHT: Polls are coming in from multiple sources. Vice Presidential nominee, Governor Sarah Palin, has won the Catholic vote! McCain benefits from this, and Obama loses with his VP pick of a pro-choice, cafeteria Catholic (Joe Biden), who defies the Church's teachings, and cannot lawfully receive communion.

Obama's pick of Biden irritated a lot of Catholics. The man represents everything that is wrong in the U.S. Catholic Church today. Then McCain gave us a pro-life, pro-family, school-choice mother of five as his running mate. Catholic voters went wild. Catholic support of Barack Obama had been declining for months, and saw no recovery after his pick of Biden for VP. Now, with Sarah Palin on the McCain ticket, Catholic support for Obama/Biden has plunged to an all time low, while Catholic support for McCain/Palin sores to new heights. All of this comes on the heels of what appears to be an unofficial Vatican approval of Sarah Palin as an American Vice Presidential nominee. Here is a small sampling of what's going on...

(NewsMax) - Sarah Palin’s firm opposition to abortion and her status as a mother of five prompted a Vatican official to describe the Republican vice president nominee as a “dream candidate.”

“I couldn't be more happy,” a U.S. church official at the Vatican told Newsmax on the condition of anonymity. “She is, in many ways, a dream candidate, at least among Americans here....

(The Campaign Spot) - Fritz Wenzel, a spokesman for the Zogby polling organization, is on XM POTUS08 right now, and he says that according to their numbers, McCain's surge in the polls started during the Democratic convention... which strikes me as rather odd.

Then he says that Sarah Palin is helping McCain by "double digits" among Catholic voters, particularly in Pennsylvania, New Hampshire, Ohio, and Michigan. While I don't find that impossible, it's interesting that a non-Catholic political figure would move the dial for Catholic voters. (Having said that, it's easy to picture her "hockey mom" style playing with Catholic voters in those states...

(Huffington Post) - Catholics are the ultimate swing voters. No other large group has switched sides so often -- or been so consistently aligned with election winners. Catholics have backed the winner of the national popular vote for the last nine presidential elections: they've helped elect five Republican presidents, three Democratic presidents, and the popular-vote-winning but presidency-losing Democrat Al Gore.

Not only because of their winning track record, but also because they make up nearly a quarter of all registered voters in the United States, Catholics could determine who wins the White House in 2008.

That's why I'm curious to hear what young, traditional Catholics -- Generations X and Y -- think of Sarah Barracuda. Is Palin winning their support?

Thomas N. Peters posted that question online at AmericanPapist.com, winner of "Best Political/Social Commentary Site" in the 2008 Catholic Blog Awards. Peters, 23, who runs the site, has appeared on CNN, BBC World News, and The Today Show. AmericanPapist.com attracts visitors who are disproportionally in their 20s, and disproportionally traditional in their religious beliefs.

"My poll saw a 19% net increase in support for Sen. John McCain because of his choice of Gov. Sarah Palin," Peters told OffTheBus. "Plenty of my Catholic friends got swept up in palinmania. Many had pro-Palin Facebook statuses the day of the announcement, and even more had pro-Palin Facebook statuses after her convention speech. It's nice to have an attractive figurehead for our ideals, as opposed to someone from our grandparents' generation."

With 605 votes tallied after Palin was chosen to be McCain's running mate, here is the breakdown among mostly 20-something Catholics who adhere to the moral teachings of the pope...